Hail to the Chief! Paramount Plus have released the first episode of Halo for free online, in the hope of bringing in an audience who will subscribe to the service and watch the rest of the season. Paramount have invested a lot of time and money into the videogame adaptation, and already renewed it for a second season, so it needs to bring in the viewing figures for them.

Some of the decisions made for the series have been controversial, including allowing Master Chief (Pablo Schreiber) to remove his helmet and Cortana (Jen Taylor) getting a redesign. These have been necessary changes, though, due to computer games and television series being different formats with different needs.

Paramount’s synopsis reads; “Dramatising an epic 26th-century conflict between humanity and an alien threat known as the Covenant, Halo the series weaves deeply drawn personal stories with action, adventure and a richly imagined vision of the future. Nobody can save humanity alone—not even the Master Chief. Meet the heroes who will risk losing everything to come together and protect humankind from the universe’s greatest threat.”

The critical consensus has been somewhat mixed, but it does have a 70% positive rating on Rotten Tomatoes. You can now check out the first episode and make up your own mind;

Schreiber has spent years training for the role of Master Chief, due to the filming being repeatedly interrupted and delayed. The actor is also known for The Wire, 13 Hours, Den of Thieves, American Gods, First Man and Defending Jacob.

If you’re a fan of alien planets, check out our guide to the best science fiction movies. 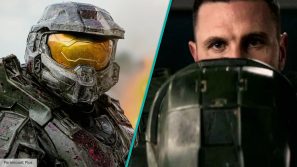 {"schema":{"page":{"content":{"headline":"Paramount Plus releases first episode of Halo series for free online","type":"news","category":"halo"},"user":{"loginstatus":false},"game":{"publisher":"","genre":"Action & adventure","title":"Halo","genres":["Action & adventure","Science fiction","Movies"]}}}}
We sometimes include relevant affiliate links in articles from which we earn a small commission. For more information, click here.
Trending in TV