We’ve got plenty of The Witcher on the way to Netflix, and some of it will challenge some perceptions of the universe. Lauren S Hissrich, showrunner on the TV series, reckons bloodshed is only one facet of the show.

In an interview with Entertainment Weekly, Hissrich explains that in her mind, gore is just set dressing to the core ideas. “If we do a kids and family show, is it going to be The Witcher at all? How do we do The Witcher without all of the gore, all of the violence?” she says. “The truth is though, those things to me are the bells and whistles of this world. If you peel away those layers, you come back to basic tales of morality. That’s what all of Sapkowski’s short stories are. They’re based actually on a bunch of folklore and mythology, the exact sort of tales that Grimms’ fairytales do, that frankly Disney movies do.”

Hissrich isn’t wrong, but she’s also referencing an upcoming all-ages TV show that’s in production that’s based within the Witcher universe. Not having quite as much decapitated heads is one thing, but being family-friendly is another.

That all said, there’s going to be plenty to do with Geralt of Rivia and the Continent to go around. After Nightmare of the Wolf, another anime movie is in the works, and then there’s The Witcher: Blood Origin, a prequel mini-series that’s set to feature Michelle Yeoh among the cast.

And let’s not forget The Witcher season 2, due to arrive on the streaming service December 17. Trailers have suggested the season is going to have a greater focus on Ciri, and after that we have season 3, with production due to begin on that next year. 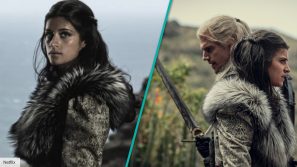