Deadline reports that The Man in the High Castle’s Frances Turner, Orphan Black’s Kristin Booth, and Cemetery Junction’s Jack Doolan are all joining The Boys Season 3 in recurring roles.

The third season will focus on Soldier Boy (Supernatural’s Jensen Ackles) and his Payback team during WWII and beyond. Payback were “the Seven before the Seven” and were the world’s leading superhero team during WWII. Turner is set to play Monique, wife of Mother’s Milk. Booth and British actor Doolan will play siblings Tessa and Tommy – the TNT Twins.

Season 3 of The Boys began filming in February and wrapped in September of this year. Filming took much longer than previous seasons due to the health and safety measures adopted due to the Covid 19 pandemic. It is likely that Season 3 will not air before Spring, or even Summer, of 2022. Karl Urban, Jack Quaid, and Anthony Starr are all returning for the upcoming series, but several changes have been made to the cast lineup.

Claudia Doumit, who appeared as Congresswoman Victoria Neuman in season 2, will have an expanded role in season 3. Colby Minifie, who plays Vought’s head of Hero Management, has also been upped to a series regular. Jeffrey Dean Morgan was rumoured to have a role in season 3, but that is now looking very unlikely.

Further casting announcements for The Boys season 3 that have previously been made include The Walking Dead veteran Laurie Holden, who will play Crimson Countess, a member of Payback. Sean Patrick Flanery of The Boondock Saints fame will play a supe named Gunpowder, Miles Gaston Villanueva will play Supersonic, and Nick Wechsler will play Blue Hawk.

Amazon has launched an in-universe digital series that will bridge the gap between Season 2 and Season 3 while also providing little details of what the characters have been up to. Amazon has also announced that The Boys is getting a spinoff set in superhero college. 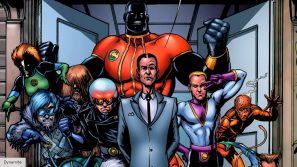