Stranger Things season 4 is set to turn our lives upside down when it hits our screens next year. We might be about to see a lot more of Hawkins, Indiana, though, with Netflix’s chief content officer, Ted Sarandos, teasing the streaming service is working on developing Stranger Things spin-offs.

Deadline reports that while speaking at the Code Conference, Sarandos talked about the success of Stranger Things season 3 and teased potential “spin-offs” for the sci-fi series. “Franchises are good, but what you want are hits,” he explained. “[Stranger Things is] a franchise being born.”

He finished by hinting that there were spin-offs in the works and that Millie Bobby Brown, who plays Eleven on the TV series, may take the lead on whatever this new series turns out to be. At the time of writing, it’s not clear if Sarandos intends for her to star in the hypothetical spin-off or if she’d serve in a producer role. There were rumours earlier this year that Brown had signed a new deal that would see her star in a show focused on Eleven, but Netflix did not confirm those reports.

Stranger things season 4 teasers have hinted that Eleven will be one of the main focuses of this new series. One of the first trailers released highlighted her relationship with her “Papa”, Doctor Brenner. In a recent interview with Elle, and reported by Comic Book, Brown explained where she sees the character going in the future.

“I hope she finds who she is, without a boy, a male influence in her life,” Brown said. “There’s Mike and Papa and Hopper and all the boys really. Even without Max, she needs to find herself by herself. Everyone needs that moment in life to sit there and think, ‘Who am I as a person, who am I without everyone around me? How can I really love myself?’ I don’t know if she knows how to do that yet. So I would like an arc for Eleven to learn how to love herself and learn who she is, which is hard in the circumstances she’s in. I think that she needs a little self-journey.”

Stranger Things season 4 will stream exclusively on Netflix next year. If you love the Upside Down and spooky streaming shenanigans check out our list of the best horror movies on Netflix. 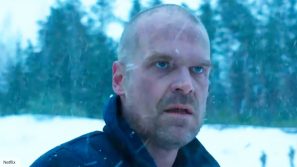