Grab your Ghostface masks slasher fans because the newest Scream movie has reportedly finished production. Directors Matt Bettinelli-Olpin and Tyler Gillett took to Twitter and Instagram earlier today to announce that Scream (2022) – also known as Scream 5 – is “complete”, thrilling all us horror movie fans who are anxiously waiting for the next instalment in the meta slasher franchise.

Since 1996, the Scream movies have been a beloved staple in the horror community. The movies tell the story of a mysterious murderer who stalks and kills teens while wearing a Ghostface mask as a disguise. Until the 2018 Halloween reboot stole its spooky crown, Scream also held the title of the highest-grossing slasher film in history. This will be the first Scream film since 2011’s Scream 4, and the first not directed by Wes Craven, who passed away in 2015.

Scream (2022) will be the fifth instalment in the deadly story, and is currently scheduled to release on January 14, 2022. After some initial delays due to Scream’s rights changing studio hands, and Covid-19 slowing down production, Bettinelli-Olpin and Gillett have reassured moviegoers that Scream (2022) is on track, and will premiere on time.

SCREAM (2022) is complete. So excited for you all to see it! pic.twitter.com/8Y5KYSYFtk

Gillett posted the news on Twitter, sharing a picture of himself and Bettinelli-Olpin safely wearing face masks, and posing next to the iconic Scream killer Ghostface. The post reads, “ SCREAM (2022) is complete. So excited for you all to see it!”

Similarly, Gillett’s co-director Matt Bettinelli-Olpin, posted a picture on Instagram of what is presumably Paramount Pictures’ editing room, sharing the movie’s title screen with the same caption as Gillett to his followers.

The movie will follow the same formula that we have come to expect from the Scream movies, focusing on a young woman who tries to uncover the identity of a mysterious killer who has been terrorising her town. Original cast members Neve Campbell, Courteney Cox, and David Arquette are also confirmed to be returning to the Scream universe in the upcoming film.

It is exciting to see what Scream 5 has planned for the loved franchise, but while we wait for more plot details and a trailer to be released, why not check out some horror movies on Netflix to pass the time. 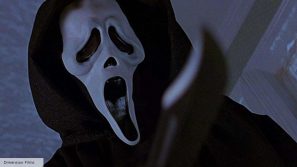