Dwayne Johnson has said he will only use rubber guns on his sets after the death of cinematographer Halyna Hutchins on the set of Rust. Hutchins, a cinematographer on the film, died after being shot by a revolver provided as a prop to actor Alec Baldwin.

“I can’t speak for anyone else, but I can tell you, without an absence of clarity here, that any movie that we have moving forward with Seven Bucks Productions, any movie, any television show, or anything we do or produce we won’t use real guns at all,” Johnson told Variety at the Red Notice premiere. “We’re going to switch over to rubber guns, and we’re going to take care of it in post [production]. We’re not going to worry about the dollars. We won’t worry about what it costs.”

The action movie star continued by saying that his production company will make sure any studio Johnson works with in the future abides by this rule, explaining that accidents like this one require filmmakers to reexamine the way they do things and how they’ll move forward in future.

“I love the movie business. There are safety protocols and measures that we have always taken in the movie business, and we take very seriously. And these sets are safe sets, and we’re proud of that. But accidents do happen,” Johnson said. When something like this happens of this magnitude, this heartbreaking, I think the most prudent thing and the smartest thing to do is just pause for a second and really re-examine how you’re going to move forward and how we’re going to work together.

Johnson also took the opportunity to pay his respect to Hutchins and her family. “I was heartbroken. We lost a life,” he explained. “My heart goes out to her family and everybody on set. I’ve known Alec, too, for a very long time.”

At a press conference in late October, investigators from the Sante Fe Sheriff’s Department outlined their initial findings. According to the BBC, officers said that a live round was fired from the revolver by Mr Baldwin and that he, and two others who handled the gun, have been cooperating with officers.

So far, 600 items of evidence have been collected, including three firearms and 500 rounds of ammunition. Police say they contain blanks and dummy rounds.

Finally, officers say it’s still too early to tell if charges will be filed related to the incident. 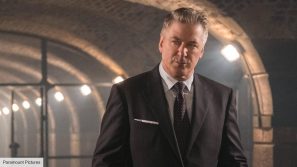