Rick Riordan, the author of the hit fantasy books Percy Jackson and the Olympians, has revealed that the new TV series adaptation of his hit novels at Disney Plus has now found its pilot director. In his blog, Riordan revealed that James Bobin (Dora and the Lost City of Gold) would helm the first episode of the demi-god show.

In January, Riordan announced that his best-selling books about a group of pre-teen demi gods encountering Greek mythology and danger on the regular would be adapted for TV. Since then, the show has gone full steam ahead, working on scripts and opening casting – which has been ongoing for several months now. The upcoming show on Disney’s streaming service is building up to be a faithful adaptation of Riordan’s novels original plotline. As such, picking a director familiar with the books and who could capture a sense of adventure from the eyes of a 12-year-old Percy Jackson was imperative.

The author explains why Bobin was ultimately chosen as the first director for the upcoming series in his blog post. “James [Bobin] knows the Percy books well. His kids are fans. His humour is wonderful. We are in good hands, demigods, and lucky to have him joining our team,” Riordan writes. “Keep your fingers crossed that everything goes the way we expect!”

Bobin is no stranger to cracking out hit adaptations. Previously he helmed the successful live-action Dora the Explorer family movie. He is also familiar with the workings of Disney Plus, having directed an episode on the streamer for the TV series The Mysterious Benedict Society. So, in light of his experience, it is no wonder Riordan is happy to have him on board the project.

Previously Percy Jackson was adapted for the big screen by 20th Century Fox in 2013. The fantasy movie was poorly received by fans and critics alike, as it changed the source material and aged up the characters. Only after two movies, the cinematic franchise was scrapped.

To avoid past mistakes, Riordan is personally overseeing the new TV series. The first season will cover book one in his literary series, Percy Jackson and the Lightning Thief, which will see Percy discover that he’s Poseidon’s son and venture to Camp Half-Blood for the first time.

Currently, there is still no release date for the Percy Jackson TV series. Stay tuned for updates. In the meantime, here is our list of the best adventure movies of all time. 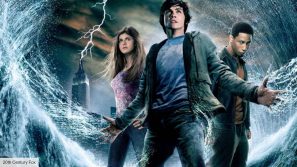