Get ready for some hardcore hauntings because it looks like Blumhouse won’t be toning down their Paranormal Activity franchise for its upcoming seventh instalment. According to the Motion Picture Association of America, the found footage horror movie Paranormal Activity 7 is officially rated R. The site also revealed that the new flick’s title is Paranormal Activity: Next of Kin.

The MPAA’s update for Paranormal Activity 7 confirms that the new instalment will follow the graphic example set by its predecessors in the popular franchise. The details for the rating reads: “Rated R for violence and bloody images, and language throughout.” This essentially confirms that the new ghost movie will have the same ratings as the other flicks in the Paranormal Activity franchise. News that the movie won’t be suitable for young kids isn’t that surprising; however, even though the R-rating isn’t shocking in itself, its announcement does hint that it is only a matter of time before Paramount releases a trailer.

Currently, plot details for the film are still being kept under wraps, and all us horror fans are dying for more info. In June 2019, it was first announced that Paramount was working on the new Paranormal Activity movie, which initially had a March 2021 theatrical release date. However, due to the pandemic and the emergence of the studio’s new streaming service, these plans were soon altered.

Paranormal Activity: Next of Kin is set to release through Paramount Plus in October, just in time for Halloween. While we wait for the fresh spooky feature to drop, why not look over our guide to the best horror movies on Netflix. 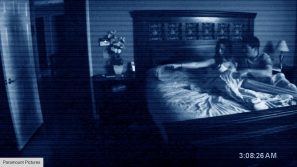 1Dune coming to HBO Max one day earlier than expected
2How to watch Venom: Let There Be Carnage – can you stream Venom 2?
3No Time To Die Easter Eggs – all the references and throwbacks to classic Bond
Latest in Movies
Robin Williams was turned down for Harry Potter role for not being British
The Batman trailer, release date, cast and more
Halloween Kills ending explained
DC Fandome: Shazam! Fury of the Gods cast share behind the scenes look at new DCEU movie
DC FanDome: Batman: Caped Crusader producers reveal more about new animated series
A