A new entry in the found footage horror movie series Paranormal Activity is arriving just in time for Halloween. The seventh instalment of the ghost movies is coming to streaming service Paramount Plus.

Paranormal Activity 7 is directed by William Eubank, who recently made monster movie Underwater, as well as 2014 science fiction movie The Signal. Beyond that, there’s very little to go on, which is par the course. The Paranormal Activity movies tend to be secretive until they’re in front of audiences, trading on the mystery until the last possible second.

It’s been six years since Paranormal Activity: The Ghost Dimension, the last entry in the series. One of Blumhouse’s biggest properties, the runaway success of the first three helped propel the studio towards being one of the major players in mainstream horror.

They’re each made comparatively cheap through mock-security cam and handheld footage, mostly using a single house for sets. The cast and director has varied through the years, though Christopher Landon, co-writer of the second, and sole writer on three-through-five, is doing the screenplay on seven.

Watch this space for more when we have it. Figuratively, mind, this post won’t burst into flames or anything. For some actual jump-scares, here’s the best horror movies on Netflix. 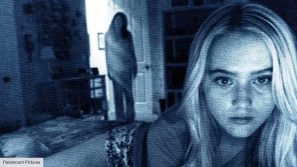 Paranormal Activity 7 gets new title, and R-rating
Get involved Continue the conversation over on The Digital Fix Forum