Netflix has released a new trailer for Ozark Season 4 Part 1, and it is just as dark and gritty as you’d imagine. On top of sharing the exciting first trailer for the hit Netflix TV series’ upcoming season, the streaming service also shared a new release date. Fans can expect to see more familial criminal antics early next year, on January 21, 2022.

Created by Bill Dubuque and Mark Williams, the TV series centres around a married couple, Marty (Jason Bateman) and Wendy (Laura Linney), who relocate their family to the Lake of the Ozarks for money laundering purposes. The new trailer opens with moody voice-overs from the show’s characters while the camera slowly zooms in on eerily still Missouri scenery. The final shot in Netflix’s teaser is of Marty and Wendy, nicely dressed, leaving their home with Bateman’s voice-over saying: “today is the beginning.”

The dramatically tense trailer is just as you’d expect a teaser for Ozark’s final season to be. We are curious to see what Part 1 of the climax to this series has to offer, especially in light of the series’ stellar third season which currently holds an impressive 98% on Rotten Tomatoes.

You can watch the trailer for Ozark season 4 Part 1 below:

Although this is the first trailer for season 4, it isn’t the first look fans have had at the series. During its Global fan event, TUDUM, Netflix shared a teaser clip of Ozark season 4. The video showed the couple experimenting with a new ‘mousse’ (that looks suspiciously like blood). Although we aren’t 100% certain about the clip’s context, Bateman suggested it was part of the family’s new money laundering venture during the fan event.

Ozark is available to watch exclusively on Netflix 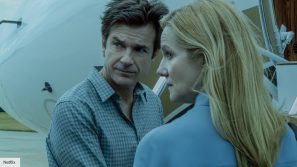 Ozark season 4 release date, trailer, and more
Get involved Continue the conversation over on The Digital Fix Forum