Could the Straw Hats be gearing up for a new anime movie? After a series of teasers from the Twitter account for the popular anime series One Piece, fans are convinced that an announcement about a new film will drop at the same time as the show’s 1000th episode to celebrate the monumental milestone.

In a special ten-day countdown for the animated series’ 1000th episode, the Japanese One Piece Twitter account posted multiple pictures that gripped the anime community’s attention. A picture of each member of the colourful crew, the Straw Hats, was posted with a single letter in each of their names highlighted in red. On the first day, Zoro’s picture was shared with a highlighted ‘O’, then Usopp with a highlighted ‘P’. Since then, we have seen an ‘F’ for Franky, an ‘I’ for Jinbe, and most recently, an L for our leading rubber-limbed man Luffy.

All the highlighted letters currently spell out OP FIL, and since teaser images for Nami, Sanji, Brook, Robin, and Chopper still need to be released, many fans think that the letters will eventually spell out OP FILM SOON.

However, despite top tier deduction work, we won’t know what this announcement hidden in the highlighted letters will be until the countdown ends. No new film has been confirmed just yet. But, we will be sure to keep you updated on any new developments.

While a new adventure movie for our favourite band of pirates isn’t a done deal just yet, there is a live-action Netflix TV series in the works. Recently the streamer announced the cast for its adaptation of the iconic anime; however, there has been no word on a potential release date for the upcoming show.

While we wait on more news about the aspiring King of the pirates and his crew of wacky friends, here is our guide on how to watch One Piece. 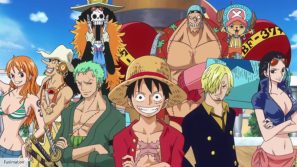