The hits keep coming for Netflix, who have just announced that they lost 200,000 subscribers in the first quarter of this year. They are projected to lose a further two million in the second quarter. After making the announcement, their share prices plummeted by 35%, shedding $54 billion in market capitalisation overnight, according to Variety.

Netflix are placing the blame at the estimated 100 million households who share their Netflix passwords with family and friends, as well as the competition from other streaming services such as HBO Max and Disney Plus. One of their plans to counteract the subscriber loss is to introduce a lower-cost, ad-supported tier.

On social media, people are blaming Netflix cancelling beloved and critically-acclaimed shows such as Tuca & Bertie, GLOW, Sense8, American Vandal, Santa Clarita Diet, One Day at a Time, and The Dark Crystal: The Age of Resistance. More recent examples include The Babysitters Club and Archive 81. There’s also the Marvel Netflix shows which were cancelled, and then migrated to Disney Plus. Another issue is Netflix burying the good quality films that they have on the platform.

“I know it’s disappointing for investors, and it is for sure. But internally, we’re really geared up, and this is like our moment to shine. This is when it all matters. And we’re super focused on achieving those objectives and getting back into our investors’ good graces” said co-CEO Reed Hastings.

This is the first time Netflix have lost subscribers in more than a decade. Another factor is that Netflix recently announced yet another price increase. There has long been speculation about how Netflix can afford its vast movie and TV show budgets, with the live-action Avatar: The Last Airbender series being a huge financial gamble for the streamer.

If you’re still a loyal Netflix subscriber and looking for something to watch, check out what’s new on Netflix for April. 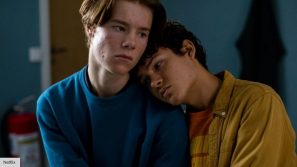 {"schema":{"page":{"content":{"headline":"Netflix loses $54 billion in value overnight","type":"news","category":"netflix"},"user":{"loginstatus":false},"game":{"publisher":"","genre":"Netflix","title":"Netflix","genres":["Netflix","TV","Movies"]}}}}
We sometimes include relevant affiliate links in articles from which we earn a small commission. For more information, click here.
Trending in TV