Naruto and Sasuke’s battle against Isshiki Ōtsutsuki in Boruto cost them both dearly. Naruto was forced to use his final trump card, Baryon mode, which led to the death of the nine-tailed fox Kurama. Sasuke, meanwhile, walked away from the battle with the leader of Kara relatively unscathed, but he didn’t realise the danger he was still in.

During the fight with Isshiki, the villainous Momoshiki managed to possess the exhausted body of Boruto and forced him to attack his sensei. Boruto stabbed a kunai into Sasuke’s special Rinnegan eye costing the former missing-nin his unique space-time ninjutsu. While Boruto was able to suppress Momoshiki and take them back to Konoha, both Naruto and Sasuke had been severely weakened.

We’ve heard from Naruto about the emptiness he feels now he no longer has a demon sealed in him. Still, the newest episode of Boruto finally reveals how Sasuke feels about being depowered. In classic Sasuke style, it turns out that he couldn’t care less, hinting that sacrifice is just part of a shinobi’s life.

“During that recent battle, I lost the Rinnegan, a big source of power for me,” Sasuke explained to his daughter, Sarada, in Boruto: Next Generation, episode 222. “But I have no regrets.” Sasuke’s comments to his daughter may seem blunt, but as she prepares for the new Chunin exams, he clearly thinks she needs to hear the harsh reality of being a ninja.

Sasuke’s probably a bit too concerned about his pupil Boruto to care too much about his missing eye. It was recently revealed that Momoshiki’s influence had had a shocking effect on Boruto and the evil Ōtsutsuki is close to permanently stealing the young ninja’s body.

If you love anime series, then check out our guide on where to watch One Piece. 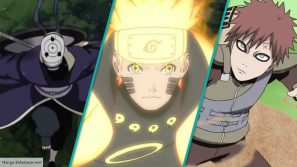