One of the producers of action movies Top Gun and Mission: Impossible has let it slip at the Top Gun: Maverick premiere that we’ll be getting the Mission: Impossible 7 teaser trailer next week. It will almost certainly be shown before Top Gun 2 in theatres, and will go online most likely after opening weekend.

David Ellison, who is a producer on both of the upcoming high-profile Tom Cruise projects, was asked “were there any stunts where you thought; Tom – I’m going to have to reel it in here, that’s too far?” and Ellison responded; “there’s one in particular that will be unveiled in the teaser we drop next week for Mission Impossible which is pretty remarkable, I don’t want to give it away…I will just say that if people thought that the base jump from Fallout was the bar, I will say Tom has outdone himself.”

Cruise is of course known for his death-defying stunts and being a hard taskmaster on set, including developing a rigorous training programme for the cast of Top Gun: Maverick. Each of the Mission Impossible films have upped the ante – from climbing the Burj Khalifa, to an underwater heist, to clinging onto the outside of a plane as it takes off.

The filming of Dead Reckoning – Part One, as the next impossible mission will be known, has already entered the stuff of legend. Long delays and Covid protocols have sent the budget spiralling. However, we know that Cruise’s rigorous standards mean that the stunts will bring the wow factor.

Mission Impossibles 7 and 8 will close out the saga for Christopher McQuarrie and Tom Cruise, meaning that Ethan Hunt will finally get to retire and rest, hopefully. As for where Tom Cruise will head next, that’s anyone’s guess, but it would be great to see him in another drama or two.

If you’re a fan of everything high-octane, check out our guide to the best action movies. 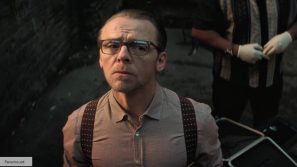 Mission: Impossible is better than James Bond, says Simon Pegg
Get involved Continue the conversation over on The Digital Fix Forum