What if..? continues to explore the infinite realities of the multiverse in a sentimental second episode that serves as a poignant goodbye to Chadwick Boseman. In this universe, T’Challa (Boseman), not Peter Quill, got picked up by the Ravagers when Ego sent them to Earth to pick up his son. Taking the young prince into space, T’Challa is raised by Yondu (Michael Rooker) and the other Ravagers to become Star Lord.

Unlike Peter, who was a cosmic footnote and a bit of a scoundrel, T’Challa becomes an intergalactic Robin Hood stealing from the powerful and giving to the powerless. Through his sheer force of will and determination, T’Challa manages to significantly impact the galaxy in a way Peter could never have.

He saves dying worlds, puts a stop to enemies before they ever become a threat, and even manages to turn the most dangerous people in the galaxy to his cause. Unfortunately, if we’ve learned anything, it’s that nature abhors a vacuum and new threats rise to occupy the void, specifically The Collector, who’s become this reality’s big bad.

Like the first episode of What if…?, the second episode boasts a stacked cast. There’s Chadwick Boseman, Michael Rooker, Karen Gillan, and a spoiler character who I presumed we’d never hear from again. Seriously when I heard his dulcet tones, my jaw genuinely dropped. It speaks to the ambition of What If…? and, if anything, Marvel Studios’ dedication to assembling an incredible cast shows their commitment to the TV series.

I also had less of a problem with the voice acting in this episode as well. While I don’t think everyone is particularly well suited to voice acting, it’s a step up from the first episode in most ways. Similarly, the animation looks a lot better. I’m not sure if it’s because the world of the Guardians has always been colourful and vibrant like a living cartoon, but it suits this style of animation.

The real reason this episode works so well, though, is because, unlike the first, which had an intriguing concept but was ultimately just a cool alternate reality story, this tale feels more substantial.

It serves as a character study for T’Challa, demonstrating how different he is from the other Marvel Cinematic Universe heroes. They’re all reactive forces who respond to events around them; T’Challa on the other hand forces the world to change around him simply by being there. 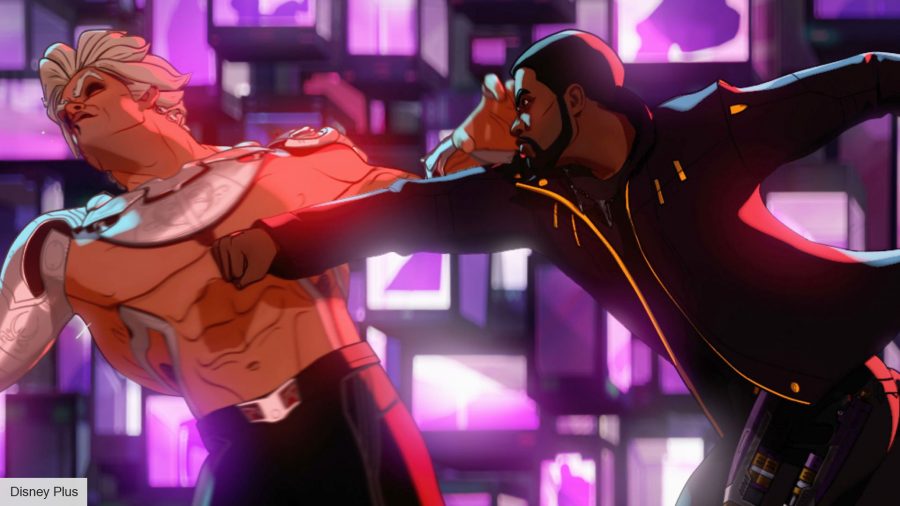 It speaks to the respect Marvel has for the character and the pedestal upon which they place him. He genuinely feels special. Had they put another character in this situation and had him save the galaxy, it would have felt contrived, but with T’Challa, it makes perfect sense.

Of course, this is how things would have panned out if he was Star Lord. I suppose ultimately, it’s a story of nature versus nurture. T’Challa was always destined to be a leader even if he didn’t have a throne to sit on.

What if..? Who is The Watcher?

Of course, the elephant in the room is that this is Chadwick Boseman’s last ever performance. I’d be lying if I said it didn’t affect how I feel about the episode, and it does hang over the whole piece.

I still can’t believe we’ll never see him on the big screen again, and when the dedication in the credits appears, I challenge you not to fight back a tear. Still, the episode serves as an elegant and fitting tribute to Boseman and his legacy in the MCU will never be forgotten.

What If…? streams exclusively on Disney Plus every Wednesday.

What If…? Episode 2 review

What If...? serves as a poignant end to Chadwick Boseman's MCU journey.

4
If These Ovaries Could Talk: The Things We've Learned About Making an LGBTQ Family