Eternals is one of Marvel’s most ambitious projects to date, and offers a fresh take on heroes from the studio. But let’s face it, it isn’t the easiest entry to the Marvel Cinematic Universe to understand. With a story filled with powerful Celestials, bloodthirsty Deviants, and seven centuries worth of history to get through the film can get a wee bit mind-boggling at points. You may be left walking out your local cinema, completely baffled and asking yourself – how did Eternals actually end? Warning major spoilers ahead.

Directed by Chloé Zhao, Eternals follows the story of ten immortals who have been tasked to protect the human race from a monster species called Deviants. They have been given this mission by Arishem, the ‘Prime Celestial’ who is responsible for the creation of life, the universe and basically everything in between. However, it seems like the Celestials don’t really want to help humans for the greater good, but are instead using them as an energy farm, so that a Celestial that has been planted in the planet’s core can grow and then subsequently explode Earth during its birth. After the death of their leader Ajak, Sersi sets out to reunite the rest of the Eternals after centuries of separation to stop “the emergence” of the new Celestial, saving Earth from essentially cracking open like an egg. Still with us? Good.

Like we said, there’s a lot going on, from universe creating giants, love triangles, to fast-paced action scenes; it is easy to get distracted and lost in Eternals’ colossal story. We haven’t even mentioned the new Deviant that can steal the Eternals’ powers, or how the Eternals discover that they are basically space robots with false memories. Luckily, we are here to fully unpack and explain what happens in the new Marvel movie. Here we go over what happens at the End of Eternals, talk about its post-credit scene, and break down the immortal heroes’ future in the MCU.

What happens at the end of Eternals?

After Sersi tells the other Eternals that the upcoming birth of a Celestial – also known as the emergence – will destroy the planet, she shares her plans to stop the process. Sersi tells the group that she doesn’t want to kill the Celestial but instead simply wants to put the ancient godlike figure to sleep. She informs the other Eternals that to do this they need to use Druig’s ability to control the Celestial’s mind long enough to put it into a slumber.

However, in order for Druig’s powers to have an effect on something as massive as a Celestial, Phastos (the engineer of the team) informs Sersi that he will have to invent something that can harness all their powers collectively. He starts planning a device that will allow all the Eternals to channel their energy into a single member of the team.

Using the sphere Sersi inherited after Ajak’s death – the golden orb used to talk to the ‘Prime Celestial’ Arishem – Phastos reverse engineers special bracelets that allow all the Eternals to link up mentally. Now, with the all-new powerful friendship bracelets intact, the group can focus their energy into one person’s special superpower. With the bracelets being made and a plan forming, everything seems hunky-dory, that is until some good old-fashioned betrayal ensues.

Ikaris turns out to be a flying double-crosser who is adamant that the emergence happens. In a flashback, we see how he was behind their past leader Ajak’s death. It turns out that golden boy Ikaris literally threw Ajak to a pack of wolves (well, Deviant wolves) after learning that she wanted to save earth from the birth of the Celestial. That’s right, Ikaris knew about the emergence for centuries; he was simply playing dumb the whole time. But after seeing the team actually making headway in stopping the emergence, he takes action against his comrades.

Ikaris destroys Phastos’ blueprint for the mind linking bracelets, the Eternal’s spaceship, and he and Sprite leave together. But Ikaris’ betrayal doesn’t stop the group or their mission. Phastos manages to invent bracelets, with or without those blueprints, and the team make their way over to the point of emergence to stop the Celestial, despite Ikaris’ best efforts.

With the Celestial now cracking through the Earth’s core, the remaining Eternals do that fancy mind link we keep going on about. Floating and glowing in the air like gods themselves, Druig begins to put the birthing Celestial to sleep using his power. However, Ikaris being a proper party pooper knocks out Druig before he can subdue the emergence completely.

On top of an angry Ikaris flying about and shooting lasers out his eyes at his ex-comrades, the evolved Deviant (the one that killed Ajak) that we have seen throughout the entire film has tracked the Eternals down and is hell-bent on killing them before the Celestial explodes the planet. However, you just can’t keep an Eternal down. Thena starts battling the Deviant, and Phastos traps Ikaris. So with their enemies temporarily subdued, it is up to Sersi to save the day. 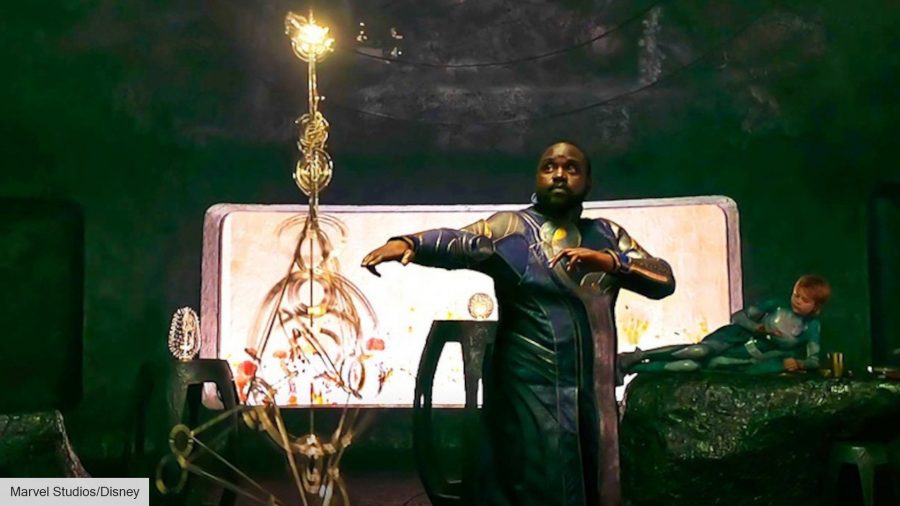 Sersi runs to the point of emergence while her comrades are fighting a Deviant and her airborne ex-boyfriend. Once she sees an easy access point to the Celestial, she touches it and activates her superpower. Sersi’s power lets her change matter, so she begins turning the Celestial to ice, effectively giving up on the “putting it to sleep” plan and straight-up killing it instead.

Ikaris, now free, tries to stop her. However, since he loves her, he can’t bring himself to hurt her and instead joins in with the now reactivated mind link. All the Eternals give their energy to Sersi, including Thena, who had managed to kill the Deviant (single-handedly, I may add). With the new power surge, Sersi turns the Celestial into ice and saves the world.

Ikaris, unable to face what he has done, says a final goodbye to her before flying into the sun, effectively killing himself in a final blaze of glory. Besides his sad end, all else ends well, with Sersi reuniting with her human boyfriend Dane, Sprite being turned into a human so she can live a normal life and age, and the rest of the Eternals going out on their own life missions.

What happens in the Eternals post-credit scene?

As expected, Eternals does have a post-credit scene, and a pretty juicy one, I might add. After stopping the emergence, we see the Eternals split up into two groups. Sersi, Pixie and Kingo decide to stay on earth while Druig, Thena, and Makkari grab the spaceship and decide to scout out fellow Eternals in order to tell them the truth about their missions from the Celestials.

However, things don’t end that happily, I’m afraid. It turns out that Celestials hold a grudge. We see Sersi and the rest of the Earth-dwelling gang get swept away by Arishem, who decides to take them back to their home ship. Arishem informs them that their memories will be extracted and used to decide whether the people of Earth live or die – hinting that the group are in danger of forgetting all their loved ones still on the Planet and even each other.

But not all hope is lost. In the post-credit scene, we see the group of Eternals that went to space still flying about without any Celestial interference. After receiving no word from Sersi and the rest of Earth’s Eternals, the gang decide to head back to check that everything is ok. However, before they can set course back to Earth, they are stopped by the sudden appearance of Harry Styles in tights and a cape. 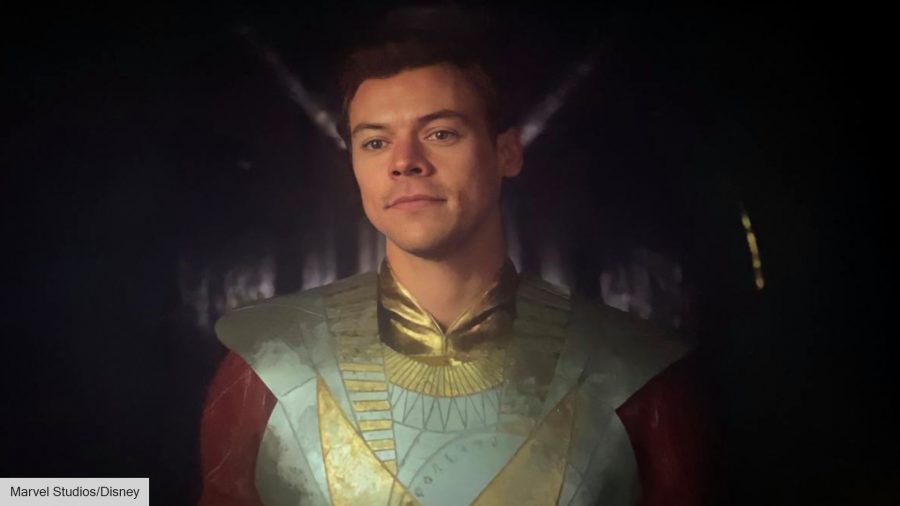 Styles introduces himself as Eros and informs the Eternals that Arishem has taken Sersi and the rest. He also lets them know that he is willing to help them on their future journey to save their friends from Arishem’s massive universe creating clutches.

OK, so you may be wondering: who is Harry Styles’ character exactly? I mean, he appears out of the blue and is introduced to the Eternals by a space troll, right? Well, Eros is actually an Eternal himself and the brother of Thanos, but don’t worry, in the comics, he isn’t a power-hungry villain like his sibling but more of a womaniser looking for a good time.

Eros’s power involves changing people’s perceptions and emotions; he generally wasn’t that serious and used his powers for his own benefit. But his carefree ways soon changed after his brother went on a destructive rampage, attacking their home planet Titan. Battling his own flesh and blood, Eros saw Thanos kill many of their home planet’s Eternals, including his own mother. Needless to say, the war has made him more of a serious immortal. In the comics, we even see him go on to join the Avengers.

Since Eros is an Eternal himself, we can expect him to offer tons of insight to the remaining crew as they go off to save Sersi and the others. It is an exciting way to tie the character into the MCU, and who knows, we may even see him team up with the Avengers in the future as well.

Will there be an Eternals 2?

With how Eternals ended and its post-credit scene, it seems like Eternals 2 will likely happen. Sersi and her friends are still in danger, Eros has appeared, and there are still Eternals across time and space that don’t know the truth about celestials. However, that being said, Marvel has said that Eternals 2 isn’t a priority. 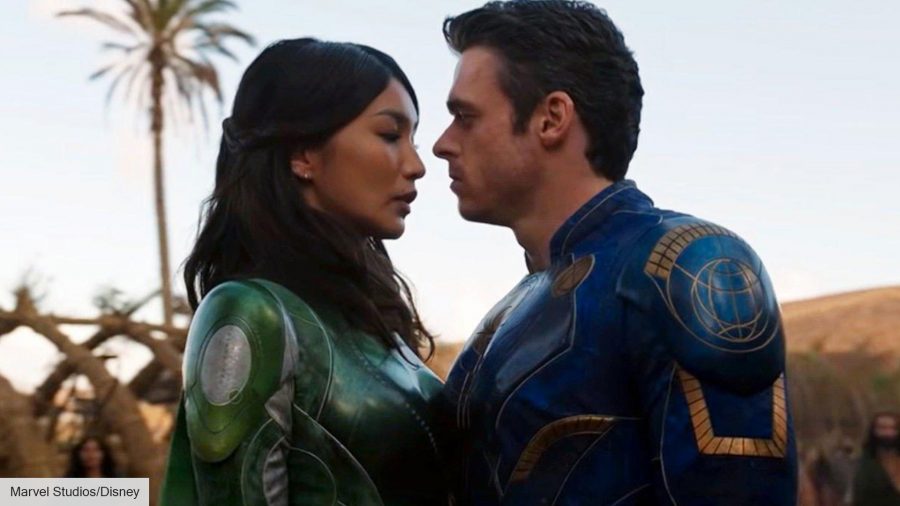 At the end of the day, we will have to see how Eternals does at the box office before we have any clear answers about a potential sequel. Although it currently holds mixed reviews having only 51% on Rotten Tomatoes, if it does well with ticket sales, Marvel and Disney may still consider an Eternals 2. We will keep you posted as soon as we know more.

Eternals is out in cinemas now. If you are after more MCU news here is our guide to Marvel Phase 4.