Straight off the back of his recent performance as James Bond in No Time To Die, Daniel Craig is already promoting his next film – Knives Out 2. In an interview with Empire, Craig has promised that the upcoming sequel to Rian Johnson’s thriller movie is a fresh take on the successful ‘whodunnit’ story, and that he is personally “very excited about” the film.

Johnson’s Knives Out earned widespread critical acclaim following its release in 2019, and grossed an impressive $311 million at the worldwide box office. Telling the story of detective Benoit Blanc (Daniel Craig), as he tries to unravel a baffling murder case, the film was nominated for Best Original Screenplay at the 92nd Academy Awards for its exciting take on the murder-mystery genre. With its financial success, the streaming service Netflix paid Johnson a staggering $450 million for the rights to two sequels, and according to Craig, they are gearing up to be just as spicy and more imaginative than the first film.

Johnson announced that Knives Out 2 officially wrapped production back in September. However, despite having finished filming, we still don’t know much about the sequel’s plot. We do know that Knives Out 2 is set to follow detective Blanc once again as he solves a brand-new mystery in Greece. Joining Craig, the drama movie’s star-studded cast includes the likes of Dave Bautista, Kathryn Hahn, Edward Norton, Janelle Monáe, Leslie Odom Jr., Kate Hudson, Jessica Henwick, and Madelyn Cline.

Currently, there is no set release date for Knives Out 2; however, the film is expected to drop on Netflix sometime in 2022. In the meantime, you can get your streaming fix with our list of the best movies on Amazon Prime. 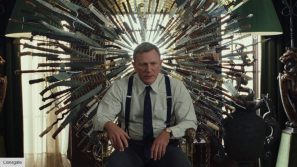 Knives Out 2 has wrapped filming, says Rian Johnson
Get involved Continue the conversation over on The Digital Fix Forum