Christmas has come early because the Home Alone reboot is available now on the streaming service Disney Plus.  Directed by Dan Mazer – the co-writer behind such comedy movies as Borat, Ali- G in the House, and Bridget Jones 2 -Home Sweet Home Alone is a reimagining of the original holiday classic and boasts a star-studded cast.

The family movie follows Max (Archie Yates), a young boy who, like Kevin before him, is accidentally left at Home when his family go on vacation. While Max enjoys his newfound freedom, the family home soon becomes the target of two burglars. These bandits aren’t wet, though, nor are they sticky. This time they’re husband and wife, Pam (Ellie Kemper) and Jeff McKenzie (Rob Delaney).

Not wanting his parents to get in trouble for leaving him behind, Max decides he can’t call the police and instead chooses to defend his Home himself. So he sets up a series of hilarious (and potentially deadly) traps around the Home to put a stop to Pam and Jeff’s plans.

Critics haven’t been too kind to the film so far, with many criticising it for its derivative plot, mean spirited humour, and reliance on nostalgia. Still, if you want to make your own mind up about the film, you can stream it now for no additional cost beyond your initial £7.99 subscription.

The release is part of the first Disney Plus Day, and it is timed to coincide with the digital release of Shang-Chi and the Legend of the Ten Rings and Dwayne Johnson’s Jungle Cruise on the platform. 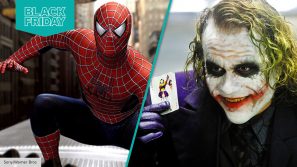