With Halloween Kills proving to be a recent hit for Blumhouse and David Gordon Green, horror movie fans are already looking forward to what Green will be tackling once his Halloween trilogy has concluded next year – and that is the Exorcist franchise. And Laurie Strode herself – Jamie Lee Curtis – is eyeing a role in Green’s next horror project.

David Gordon Green’s Halloween trilogy, which began in 2018 and is set to conclude in 2022 with Halloween Ends, should be the swansong of Curtis’ iconic character Laurie Strode, who has played on-and-off for over 40 years. But Curtis already has an eye on which horror character to inhabit next – and is there any more infamous than the devil himself?

But Green said she’d have to audition for the role; “I’ll have to get her to audition for that one,” Green replied. “You know, she did the crying baby for the last Halloween movie, so she’s a talented voice actor as well.”

The Exorcist is set to be another trilogy, with the current plan for Green to write and direct all three. Leslie Odom Jr has already been cast in the first one, as the father of a possessed child and Ellen Burstyn reprises her role from the 1973 original. The release date is already set at October 2023 – marking 50 years since the first Exorcist film. Jason Blum and Universal are eyeing a similar release strategy to Halloween, involving streaming service Peacock.

In an interview with Collider, Green said that Halloween and The Exorcist are two completely different beasts; “To me, it’s as different as making Stronger and Pineapple Express. They’re just so unbelievably different. One is very primal and the other is very academic. So it’s just trying to switch gears there. I’m sure I’ll know more a year from now when I’ve gotten a handle on what Exorcist is. The script’s written. And it was a very, entirely different writing process.” 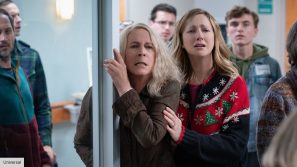