After 40 years of facing off against Michael Myers, Jamie Lee Curtis has revealed that the upcoming horror movie, Halloween Ends, will likely be the last time she plays the iconic slasher survivor, Laurie Strode.

With Halloween Kills (the sequel to the 2018 Halloween) set for release this year in September, the third film in David Gordon Green’s revival of John Carpenter’s stalker story is already underway. Halloween Ends is scheduled for a 2022 release, and is looking like it’ll be the movie that finally ends Curtis’ battle with the famed serial killer once and for all.

Appearing in the original 1978 film Laurie Strode has always been an iconic figure in Michael Myers story, a serial killer who stalks a neighbourhood while wearing a creepy washed-out mask. Curtis reprised the famous role in the 2018 reboot, which retconned all previous sequels to Carpenter’s original movie. In an interview with Total Film, Curtis discussed her character’s future in the slasher franchise. “I would say, given what I know about the next movie, I think it will be the last time that I will play her,” the star said.

However, before fans jump to any conclusions or think that this means that Myers will finally win the two’s deadly cat and mouse game, the actor hinted that her demise wouldn’t be her reason for leaving the horror movie. “And I’m not saying something like, ‘Oh because I die!’ It’s nothing to do with that,” she explained. “I think it will be a spectacular way to end this trilogy.”

With a title like Halloween Ends, it’s safe to say that the third film in Green’s slasher movies will at least be dramatic, and will have a sense of finality to it. However, producers have said that the franchise’s future is uncertain, and any long-time horror fans know that Michael Myers never really stays dead for long. It’ll be exciting to see what will happen to Laurie Strode next year.

Halloween Kills will release in the UK and US on October 15. While we wait for the slasher, check out our list of the best horror movies on Netflix. Jamie Lee Curtis is also set to star in the upcoming Borderlands movie. 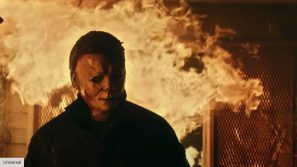