The deadites are coming back for Evil Dead Rise, and executive producer Bruce Campbell has been talking up the horror movie. For this sequel, the Necronomicon targets a family, and Campbell reckons that makes everything all the harder to sit through.

“This family is not the same at the end of the movie. They’re gutted. The whole family is destroyed. These people get possessed. Brothers and sisters, sons, daughters, you know. So yeah, it’s a family affair,” Campbell tells BlairWitch.de, translated via SlashFilm. “I think that makes the possession and killing your siblings – things like that, even harder. In the original Evil Dead, there was only one brother and sister combo, Ash and his sister Sheryl. The rest were just friends. Now this is all, they’re all related in this household. Much more excruciating.”

For this instalment, the monster movie series moves from isolated cabins to Los Angeles apartments, where two sisters, Beth and Ellie, are having a long overdue catch-up. From the sounds of Campbell’s description, the terror goes well beyond just that one set of siblings.

Evil Dead Rise was announced back in May, and filming has already been completed. Lee Cronin, of Irish ghost movie The Hole in the Ground, is directing, with Evil Dead architects Campbell, Sam Raimi, and Bruce Tapert all producing.

Campbell announced his retirement from playing Ash Williams, original Evil Dead hero, back in 2018, has been adamant he isn’t appearing in front of the camera for Rise. Alyssa Sutherland and Lily Sullivan are playing the leads this go around, with Gabrielle Echols, Morgan Davies, and Nell Fisher in supporting roles.

8 months, 1 Covid Lockdown, 6,500 litres of blood, and more memories than my brain can even process. That is a wrap on #EvilDeadRise. Thank you New Zealand, it’s been a blast. Time to head home and cut this beast together. pic.twitter.com/iyah4vEEqL

The official synopsis reads: “A road-weary Beth pays an overdue visit to her older sister Ellie (Sutherland), who is raising three kids on her own in a cramped L.A apartment. The sisters’ reunion is cut short by the discovery of a mysterious book deep in the bowels of Ellie’s building, giving rise to flesh-possessing demons, and thrusting Beth into a primal battle for survival as she is faced with the most nightmarish version of motherhood imaginable.”

Filming wrapped in October, and in the US, the zombie movie will release in 2022 on streaming service HBO Max. StudioCanal is handling distribution in Britain, and we’ll keep you informed on when you, too, can get another visit from the deadites. For some modern chills right now, we have the best horror movies of 2021. 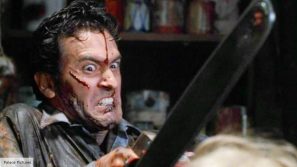