Evil Dead Rise, the next instalment in the cult horror movie franchise, will usher in a new structure for the Evil Dead movies. In an interview with Collider, Bruce Campbell – the producer of the upcoming flick, and former Evil Dead star – explained how the latest film introduces a breakaway from the “traditional form” that we’ve come to expect from the demonic story.

Debuting in 1981, the Evil Dead movies revolve around the Necronomicon, an ancient Sumerian text which has a tendency of summoning demonic forces and causing supernatural possessions. Ashely Joanna ‘Ash’ Williams (Campbell) is the only character to appear in every Evil Dead movie and has been the central figure in the series. However, when asked what the next step for the franchise was, Campbell doubled down on his retirement from playing Ash, and says the upcoming monster movie Evil Dead Rise is about breaking the Evil Dead norm.

“I’m done playing Ash, so that determines a lot of where we go with the franchise without that character, but there are more stories,” Campbell explained. “We’re doing it book-focused these days. That darn book [The Necronomicon] gets around, and that’s how we play it. That book wound up in an urban environment with a single mom, so let’s see what happens. It’s fun to fiddle with it.”

“There’s not going to be any traditional form of Evil Dead anymore,” the star continued. “Ash is gone. I’ve retired the character because I physically just can’t do him anymore, so why bother? Why do I do it? It’s time to hang up the chainsaw.”

Evil Dead Rise, which officially wrapped filming back in October 2021, has Alyssa Sutherland and Lily Sullivan as the leading characters this time around. Lee Cronin, who Evil Dead creator Sam Raimi handpicked, directed the flick. Campbell, Raimi, and Bruce Tapert are all sitting in the producers’ seats for the new film.

Fans can witness Evil Dead Rise breaking the series’ “traditional form” for themselves soon. The thriller movie is set to release on the streaming service HBO Max in 2022. While we wait on more Evil Dead updates, why not look over our guide to the best horror movies of 2021? 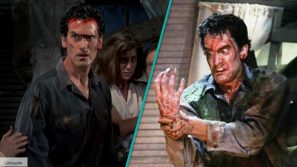 {"schema":{"page":{"content":{"headline":"Evil Dead won’t have any “traditional form” any more, says Bruce Campbell","type":"news","category":"evil-dead"},"user":{"loginstatus":false},"game":{"publisher":"","genre":"Comedy","title":"Evil Dead","genres":["Comedy","Fantasy","Horror","HBO Max","TV","Movies"]}}}}
We sometimes include relevant affiliate links in articles from which we earn a small commission. For more information, click here.
Trending in Movies