Seth Rogen has criticised the Covid-19 safety measures at the 73rd Emmy Awards. Rogen, who was on stage to present the first prize of the evening for ‘Supporting Actress in a Comedy Series’, couldn’t resist taking a few pointed jabs at the award show for having “lied” about the safety protocols.

“Let me start by saying, there’s way too many of us in this little room. What are we doing? They said this was outdoors. It’s not,” he said. “They lied to us. We’re in a hermetically sealed tent right now. I would not have come to this. Why is there a roof? It’s more important that we have three chandeliers than that we make sure we don’t kill Eugene Levy tonight. That is what has been decided.”

“This is insane,” he continued. I went from wiping my groceries to Paul Bettany sneezing in my face. So, that’s a big week! If anyone’s gonna sneeze in my face, Paul, I want it to be you.”

After Rogen’s speech, host Cedric the Entertainer was left to pick up the pieces and reassure the guests that their safety was a priority. “It feels amazing to be here. We’re all vaccinated in this room,” he said. “I’m vaxxed, but I didn’t have no reactions like Nicki Minaj‘s cousin’s friend. I got the Pfizer [vaccine]. Because I’m bougie. That’s the Neiman Marcus of vaccines. There’s Moderna, that’s Macy’s, and then Johnson & Johnson, that’s TJ Maxx, of course.”

That moment when Seth Rogen is more concerned about Covid safety, his fellow actors’ lives and sending the right message to CBS’s aging viewers than @CBS itself. #Emmys pic.twitter.com/EB7MHEDEPq

The ongoing Covid-19 pandemic and the surge in the Delta variant in the US meant this year Emmys looked very different to normal. The show moved from its traditional venue at the Microsoft Theater to the L.A. Live event deck. An air-conditioned tent was built for attendees, and tables were put in place to accommodate socially distanced seating.

Unlike last year’s digital ceremony, guests were allowed to attend the event, and masks were worn during commercial breaks. International attendees also called in from remote locations to accept their awards rather than attend the show in person.

The Emmys celebrate the best TV series of the year, and the big 2021 winners were The Crown and Ted Lasso season 2. Surprisingly, the streaming service Disney Plus left empty-handed despite the Marvel Cinematic Universe’s WandaVision being a favourite on the night.

The Emmy Awards
TV
Read next 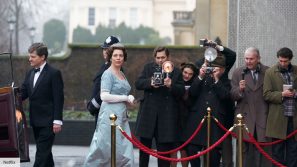