Things are ramping up for planet Arrakis. We recently got a new Dune trailer, and now the showrunner for the prequel TV series has been announced.

Diane Ademu-John, who most recently served as producer and writer on Netflix’s The Haunting of Bly Manor, is now the showrunner for Dune: The Sisterhood. A prequel to the upcoming science fiction movie, it centres on the Bene Gesserit, an order of women who cultivate incredible abilities through precise control of their mind and bodies. Using their heightened physical and mental states, they’re able to maneuver around the feuding houses of The Imperium to get to Arrakis and its sweet, sweet spice.

Rebecca Ferguson’s Lady Jessica from the film is a member. The show was ordered straight-to-series for streaming service HBO Max in 2019, and Dune director Denis Villeneuve is attached to direct the pilot. Jon Spaihts, a co-writer on Dune with Villeneuve and Eric Roth, was originally the showrunner, but chose to step down from that position to focus on the movie.

As the Dune release date gets closer, we’re seeing more and more of the blockbuster. Timothée Chalamet’s Paul Atreides and Zendaya’s Chani are the leads in the sweeping fantasy movie about two warring houses, Atreides and Harkonnen, and their struggle to dominate the planet of Arrakis. Said planet is the only source of a drug called spice that prolongs life, and whoever controls that, controls much of the known universe. Metaphors!

No release window for Dune: The Sisterhood just yet, but we’ll keep you informed. They may not be as cool as the sandworms, but we have the best alien movies for some interstellar fun in the meantime. 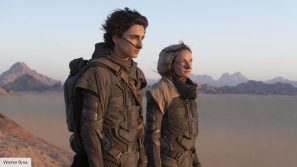