David Tennant has had an incredibly busy last two years, despite the restrictions of working as an actor during the pandemic. We have managed to count 18 entries on his IMDb from 2020-2021 alone and he is currently working on season two of Good Omens.

One of these credits is Des, a mini-series about Scottish serial killer Dennis Nilsen, for which Tennant has recently been nominated for an International Emmy award.

Tennant also managed to channel the pandemic into a creative outlet with two seasons of Staged, co-starring his Good Omens colleague Michael Sheen. This was a zoom-based show in which Tennant and Sheen played versions of themselves and it came with some surprising celebrity cameos.

In an interview with The Hollywood Reporter about his Emmy nomination for Des, Tennant was inevitably asked about Doctor Who and who might play the role after Jodie Whittaker. He gave a typically pragmatic answer;

“It’s a big decision to make, isn’t it? I’m glad I’m not making the decision. It’s a part that can sort of go anywhere, and yet you just know when that casting is right. It’s very hard to pluck someone out and drop them in it. So I’m glad I don’t have to decide. Was that a good dodge to your question?”

It was recently announced that Russell T Davies would be returning to Doctor Who for the long-running show’s 60th anniversary and beyond. A New Year’s Day Special episode of Doctor Who has been confirmed and Jodie Whittaker will be making her last appearance as the Doctor in a special which will be aired in autumn 2022.

Yesterday, a conservative MP came under fire for claiming that casting a woman in the role of Doctor Who had pushed young men into a life of crime.

Jodie Whittaker has been speaking of the advice David Tennant gave her when she was cast in the role; “He said ‘This will go so quickly. It will feel like it goes in a whirlwind.’ And it has!”

It remains to be seen in what direction Russell T Davies will take the show once he returns and who will be cast as the next doctor. 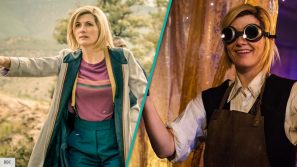 {"schema":{"page":{"content":{"headline":"Next Doctor Who actor “can go anywhere”, says David Tennant","type":"news","category":"doctor-who"},"user":{"loginstatus":false},"game":{"publisher":"","genre":"Family","title":"Doctor Who","genres":["Family","Science fiction","TV"]}}}}
We sometimes include relevant affiliate links in articles from which we earn a small commission. For more information, click here.
Trending in TV