Neil Gaiman has revealed the first image from Season 2 of Good Omens, featuring Michael Sheen and David Tennant, which will be returning to Amazon Prime. It is taken inside Aziraphale’s book shop, with the characters talking to someone unseen –  “that would be telling.”

Aziraphale is clutching a cup of tea while looking his usual worried self and Crowley is in sunglasses, with a big beaming smile on his face. This can only mean that something foolhardy and dangerous is afoot. The image could relate to the fact that the season, which moves beyond the realm of Gaiman’s book (which he co-wrote with Terry Pratchett), concerns “an unexpected messenger presenting a surprising mystery.”

In the first season, Sheen played the book-dealing angel Aziraphale and Tennant played his best friend, the fun-loving demon Crowley – who were forced to team up in order to thwart the apocalypse.

Since season one of Good Omens aired, Sheen and Tennant have got many of us through lockdown with two seasons of the BBC show Staged (available on Hulu in the US). In the mostly Zoom-based show, they play versions of themselves, dealing with the pandemic and trying to rehearse a play over video calls.

You waited. And here we see Crowley and Aziraphale, inside the bookshop talking to… well, that would be telling. Welcome to Season 2. This time it's ineffable.#GoodOmens @PrimeVideo pic.twitter.com/ztm2fl9y3a

And in a comment posted on Collider, Gaiman talked about his excitement at returning to the world of Good Omens for season 2; “I am so happy to be back here on the streets of Soho, watching, every day, the glorious performances of Michael Sheen and David Tennant. I miss having Terry Pratchett’s genius, but it does feel like we are still all walking around inside his head.”

He continued; “It’s been an absolute pleasure to have the brilliant John Finnemore co-write this season’s story shenanigans with me, and to work with director and my co-showrunner Douglas Mackinnon as he steers the ship, along with our astonishing crew, who have returned to do it again.”

“In this season we get to have new adventures with old friends, to solve some extremely mysterious mysteries, and we encounter some entirely new humans (living, dead, and otherwise), angels, and demons. We were lucky in the first season to have so many outstanding actors taking part, so I took pleasure in inviting people back, wherever we could, some in the roles they played originally, some in new parts written just for them.”

Returning actors from season 1 include Nina Sosanya and Reece Shearsmith, Michael McKean and Miranda Richardson – but some, or all, could be playing different roles from the first season. 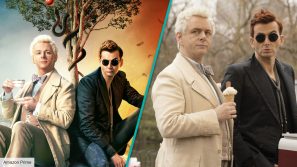 Good Omens season 2 release date, trailer, cast and more
Get involved Continue the conversation over on The Digital Fix Forum