David Tennant has teased that he may not be done with Doctor Who just yet. With the news that Russell T. Davies is set to return to the popular sci-fi series as showrunner for the 60th anniversary and beyond, fans are already speculating who else might return for the special.

Inevitably, considering how popular his Tenth Doctor was with audiences,  David Tennant has been asked whether he might return to the TV Series that helped to make him a household name. In an interview with Digital Spy, Tennant was cagey about specifics but didn’t deny a return was possible.

“It all depends. The moment you say yes to Doctor Who, even before you’ve done an episode, you’re being asked whether you’d go back after you finish. I don’t know if this happens to James Bonds. I don’t know if Pierce Brosnan gets asked if he’d go back to James Bond,” he explained. “Because there’s that element of fantasy, anything is ultimately possible. You should never say never to anything. I think that way madness lies.”

With the news that current Doctor the wonderful Jodie Whittaker has finished shooting her final scenes as the Doctor, fans are already speculating who will play the fourteenth regeneration.

There are rumours online that It’s a Sin and Years and Years star Lydia West may be the next to own the TARDIS, but that’s just speculation at the moment.

Still, wouldn’t it be nice for whoever plays the next Doctor in the specials to see an old face or two? Maybe Tennant and Whittaker could have a mini Broadchurch reunion on the set of the 60th anniversary special?

Doctor Who: Flux premieres on the BBC on October 31. 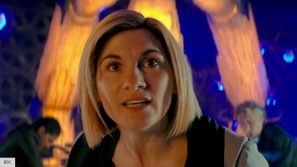