The upcoming live-action adaptation of The Little Mermaid is getting a musical update. In an episode of the Disney For Scores podcast, famed Disney composer, Alan Menken, shared that he and Lin Manuel Miranda (Hamilton) worked together on a fresh magical score. According to Menken, the new Disney movie will feature at least four new songs.

Menken was one of the talents behind the music for the original animated movie The Little Mermaid back in 1989. Working with Howard Ash, the two made waves in Hollywood and Disney history with their aquatic soundtrack, winning Best Original Score and Best Original Song (Under the Sea) at the Academy Awards. In the live-action adaptation of the ‘80s movie, Miranda was tasked with filling the big musical shoes of Ash and Menken. However, Menken revealed that Miranda reached out to him after having some trouble matching his iconic work.

The two composers ended up collaborating on the new score, coming up with half as many songs as Ash and Menken originally did and creating at least four brand new tracks for the flick. “At first, Lin-Manuel Miranda was struggling to do Alan Menken-style songs, and he felt like walking in Howard Ashman’s shoes was a daunting prospect,” Menken explained. “Then we wrote some songs that were in Lin’s wheelhouse, and for me, walking in Lin-Manuel Miranda’s shoes was a daunting prospect, but we had a blast.”

Miranda is no stranger to Disney. Previously he produced the music for the 2016 movie Moana, starring Dwayne Johnson. He has also been on board to create the soundtrack for the upcoming fantasy movie Encanto. Likewise, Menken was responsible for some of the studio’s best musical movies, including Beauty and the Beast, Hercules, Aladdin, and Pocahontas. It’s safe to say that between Menken and Miranda, the soundtrack for The Little Mermaid is in good hands.

Currently, the live-action adaptation of The Little Mermaid is set to release on May 26, 2023. Filming officially wrapped in July, which Halle Bailey, who plays Ariel, celebrated in an Instagram post that gave us a first look at her in costume. While we wait on more news from the Magical Kingdom, why not look over our guide to the best family movies of all time. 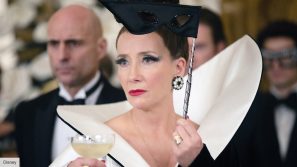