With Jungle Cruise releasing this week, and a Tower of Terror movie currently in development, Disney seems keen to keep turning its theme park rides into blockbusters, and next on its list is its Haunted Mansion attraction.

Despite being adapted already back in 2003 as a comedy movie starring Eddie Murphy, the studio has set its sights on the ride again, and is planning to remake the family-friendly film. Justin Simien (Dear White People) is already on board to direct the new Haunted Mansion flick, with LaKeith Stanfield (Knives Out) and Tiffany Haddish (Girls Trip) in talks to star in the upcoming film.

Although the original Disney movie was a box office hit, it never achieved the same level of success as its predecessor and fellow ride-based film, The Pirates of the Caribbean: The Curse of the Black Pearl. The creepy fantasy movie told the story about a realtor (Murphy) whose family is lured into a ghostly house that turns out to be haunted, full of spirits who are obsessed with his wife, and want him and his children out of their way. The 2003 film flopped critically, having only a 14% rating on Rotten Tomatoes. According to The Hollywood Reporter, this new version is being directed by Justin Simien, and is unrelated to the Murphy flick.

Stanfield recently received his first Oscar nomination for his performance in Judas and the Black Messiah. He is also set to star in the upcoming science fiction movie, Foe, alongside Paul Mescal and Saoirse Ronan. Similarly, Haddish is an actor in high demand, and is set to appear in the highly anticipated film, The Unbearable Weight of Massive Talent, where Nicolas Cage will be playing himself. Both stars have proven their acting chops, making us hopeful that the new Haunted Mansion movie will easily outshine its predecessor.

Currently, there is no more information on the scary flick, but we will keep you updated as soon as we know more about the new horror movie. While you wait, be sure to check out our guide of the best family movies. 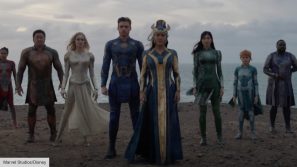 Disney will release Marvel Eternals, and rest of 2021 movies exclusively in cinemas
Get involved Continue the conversation over on The Digital Fix Forum