After being put in the doghouse thanks to some Covid-19 related delays, everyone’s favourite big red pooch officially has a new theatrical release date. Paramount Pictures took to social media to share a new trailer for the upcoming family movie Clifford the Big Red Dog, and confirmed that the film will drop in theatres and on the streaming service Paramount Plus on November 10.

Originally, Clifford the Big Red Dog was planned for a widespread theatrical release in September 2021. However, due to an increase of cases of the Covid-19 delta variant, the live-action adaptation of Norman Bridwell’s beloved red canine was put on hold. After waiting two months on a potential release date, the studio has finally given fans an update on the fantasy movie. Posting on Twitter, Paramount shared that the film will be out in November and revealed an all-new adorable trailer that focuses on the fictional pup’s magical ability to grow based on the love he receives.

Paramount’s official synopsis for Clifford the Big Red Dog reads: “When middle-schooler Emily Elizabeth (Darby Camp) meets a magical animal rescuer (John Cleese) who gifts her a little, red puppy, she never anticipated waking up to find a giant ten-foot hound in her small New York City apartment. While her single mom (Sienna Guillory) is a way for business, Emily and her fun but impulsive uncle Casey (Jack Whitehall) set out on an adventure that will keep you on the edge-of-your-seat as our heroes take a bite out of the Big Apple. Based on the beloved Scholastic book character, Clifford will teach the world how to love big!”

It’s a promising sign for cinemas that Paramount has decided to go with both a theatrical release and offer its streaming service as a viewing option for the new movie. The new Paranormal Activity horror movie is still a Paramount Plus exclusive, so the studio hasn’t fully committed to theatrical releases, either.

Some dogs have a way of growing on you. 😉 Watch the new trailer for Clifford the Big Red Dog, in theatres and on @ParamountPlus November 10. #CliffordMovie pic.twitter.com/n6g04Eb96P

Clifford the Big Red Dog promises to be one of the biggest kids movies of the year and is likely to do well at the box office as Covid-19 restrictions ease, and family’s start venturing back into theatres. However, only time will tell if the red dog can rake in those big bucks. Stay tuned for updates.

If you are after more wholesome stories, here is our list of the best animated movies of all time. 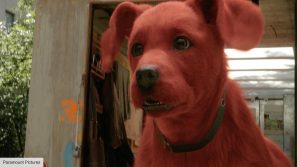