What is the After Life season 3 release date? The award-winning comedy After Life is the brainchild of comedian Ricky Gervais. Reportedly the most-watched British comedy in the world, streaming service Netflix has ranked it as one of its top shows, and most interestingly, it will mark the first of Gervais’ TV series that has ever gone to a season 3.

After Life is a black comedy that stares grief right in the face, Tony Johnson (Gervais) is a depressed widower, recalling beautiful moments with his wife, Lisa (Kerry Godliman). It’s been praised for exploring themes that resonate with viewers in true Gervais style with hard-hitting humour. Set in the fictional town of Tambury, viewers have watched as Tony adapts to life after Lisa, continuing his job as a journalist at the local newspaper, and making friends in unexpected places.

After Life follows Tony as he becomes a man that simply doesn’t care about the world without the love of his life in it. Starring other such brilliant comedic names as Roisin Conaty, Joe Wilkinson, and Diane Morgan, After Life, has captivated Netflix viewers with the first two seasons, and we now look ahead to the future with season 3. Here’s everything we know so far.

What is the After Life season 3 release date?

We’re in luck. After Life has officially been renewed for a third and, as far as Gervais is concerned, final season.

He says: “Big news… Because you watched After Life 2 so quickly, Netflix has been on the phone a few times and we think I can manage one more season before I die [laughs].”

“Last one, definitely. It’s the first time I’ve done a third series of anything. So, yes, it’s got to be even better than the first one. So Netflix can’t say do a fourth season, I think I might have Tambury hit by a meteor.”

He’s not wrong. Surprisingly, Gervais’ biggest hitters The Office, Extras, and Derek only ran for two seasons each (Christmas specials, aside). So, season 3 of After Life is a great moment for Ricky Gervais lovers.

And, in October 2021, Gervais revealed that he had officially delivered season 3 to Netflix, quipping all they need to do now is translate it into 160 languages.

Is there an After Life season 3 trailer?

Right now, there’s not. If history holds true, After Life season 1 and 2 trailers dropped mere weeks before the full show came to Netflix so we’re not expecting the trailer just yet. 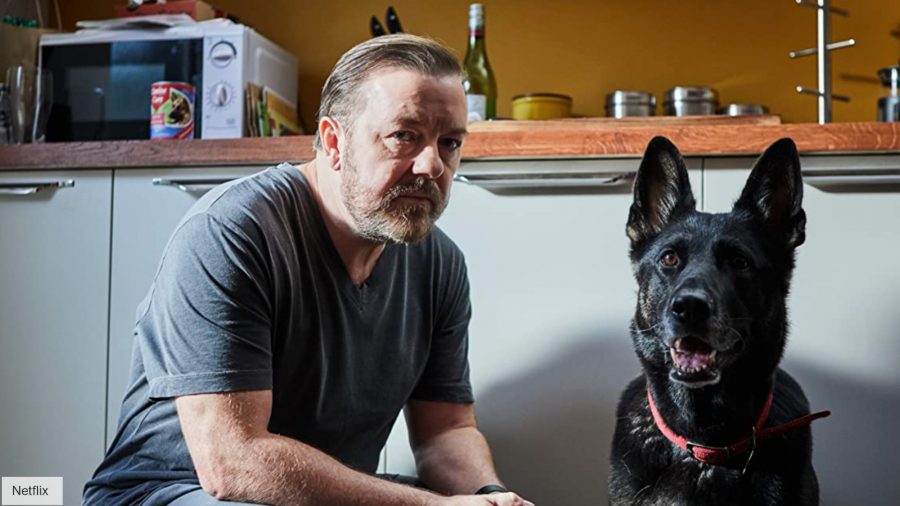 Who will be in the After Life season 3 cast?

We expect a lot of characters from season 1 and 2 to return in season 3. Ricky Gervais is making it so it would be pretty odd if he also didn’t continue to star in it.

During his live stream on Twitter, he also addressed one fan’s plea for more of one particular character: “More Sandy in series 3. Yes, I am going to concentrate on some of the main characters more. Get more into their lives and just twist the knife a little bit more. I can’t give anything away.”

Netflix has also shared some very-telling images from the set of season 3 revealing some of the cast that were filming alongside Gervais. You may also be pleased to hear that Brandy the dog is back.

Some photos from the set of After Life S3, and yes – don't worry – the dog is back!!! @rickygervais pic.twitter.com/wogwxCGhXp

Pictured above, we can see that Anne (Penelope Wilton), Pat (Joe Wilkinson), Julian (Tim Plester), Lenny (Tony Way), and June (Jo Hartley) are all back for season 3. And Ricky has also confirmed the flashbacks to Lisa (Kerry Godliman) will also continue.

So pleased to announce I’ve joined the amazing cast of #Afterlife3
First day filming today with @rickygervais
And what a laugh it was! pic.twitter.com/E2o477yWyV

When it comes to new cast members, comedian and actor Kate Robbins announced she’d be joining in season 3 too although her role is unclear for now.

What will be the After Life season 3 plot?

During his livestream, Gervais revealed some of his thoughts on where After Life season 3 will go next. “I’ve got a couple of ideas of how to start it and the tone and the themes. Don’t know how to end it. And then, I mean, it’s such early days.”

“I’ve probably got 30 pages of notes and if you think you probably need six times that and I haven’t written it, it’s just notes,” he continued. “So, yes, early days. Because I know it’s the end, I can put everything into it.”

And when it comes to the end, during an interview with The Evening Standard, Gervais revealed, “With After Life, I did want Tony to complete his journey – not wrapped up in a bow and happily ever after, but he is here now, pushing towards a conclusion. There are hundreds of possible endings for After Life and you want to choose the best one.”

One of the main themes of AfterLife is that a dog can save your life. This is ramped up in season 3 & she becomes as important as any other character. pic.twitter.com/LsliESGybo

We know that the theme of a dog’s ability to save lives has been one that Gervais has threaded throughout After Life thus far and he has expressed that this will only continue to ramp up in season 3.

There’s a lot of loose ends to tie up before the conclusion of After Life. Perhaps we’ll see more of Emma (Ashley Jensen), as their relationship developed throughout season 2, and maybe Tony will learn to live with his grief in a way that brings him some happiness. We doubt we’ll have to wait too much longer to find out and we’ll be sure to keep you updated when we hear more.

If you can’t get enough great TV check out our guides on Bridgerton season 2 and Stranger Things season 4.