In the drama movie Wild Indian, Michael Greyeyes plays Makwa, an Indigenous man who, after years of abuse and trauma, struggles with the anger that burns inside him. Directed by Lyle Mitchell Corbine, Jr, the thriller movie examines internalised racism as it affects Indigenous communities across decades.

Opposite Greyeyes is Chaske Spencer’s Teddo, Makwa’s childhood friend who became trapped in a different way their small community. Together, they form a duality on the way close-knit towns can be harmful to those growing up there, especially if part of a marginalised group.

Fresh off his nominations for Outstanding Lead Performance and Outstanding Performance in a New Series at the Gotham Independent Film Awards, Greyeyes spoke to us about making the film. He speaks to how Corbine Jr’s script spoke to him, the emotionality of the feature, and some of the more harrowing scenes that were put together in the short shoot. He tells us about why films like this, and horror movie Blood Quantum, are part of a scene for Indigenous filmmaking, pointing to a bright future.

The Digital Fix: How did you come to be a part of Wild Indian?

Michael Greyeyes: It’s a wonderful story. I was working on another project, and I got an email from my manager, who said, ‘We just received a script and a lovely letter from a filmmaker’. And the letter said, ‘I’ve written this script, I hope that you would read it, and the lead character is somebody that I wrote for you, and I would be quite honored if you’d read the script and consider the role’.

I do not receive these kinds of letters, so I was intrigued. Then I read the script, and the moment I finished the last word, my phone was against my ear, and I was telling my reps, I said, ‘I have to do this film. I don’t care how we do it, we have to make it happen’. That’s the way the script affected me. I knew that it was a role that I simply had to do.

You deliver such an understated performance, I could feel the trauma behind this character’s eyes. Can you tell me about finding that emotional core for Michael?

Thank you. It’s present in the writing, it really is. Lyle’s writing is so brilliant. What I loved about the character is, I’d never read a character that had such utter self-loathing. I’d never read a character that had internalised the racism so completely, that it displaced, essentially, his core personality. So, in a way, I knew that I was dealing with someone who, through their actions, could be misconstrued as a sociopath.

But actually, with the writing, and with my understanding of our own trauma, as a community, I knew that these were simply layers of behaviour that were covering pain. And so my challenge was to lean into his violence, lean into his propensity for coldness, and ambition, and balance it with this boy, so beautifully realised by Phoenix Wilson, that remained inside him at all moments.

You have a couple of particularly violent scenes, with one involving choking towards the start. Can you tell me about putting together these harrowing moments?

Yeah, that scene was so disturbing to read, and so disturbing to play. Claudia Lee was the wonderfully generous actor that worked on the scene with me. I think we know about people by what they do, versus what they say. And in his most private moment, we could see that Michael, Makwa, is a person with such inherent rage and violence that he almost opens the door of the cage of it to allow it out. Like some kind of predator. Then it escapes, and then he grabs and he pulls it back in.

That’s what it felt like playing the scene, like I want to see how far this will escape from me, escape from my iron grip. He plays with it like a cat and mouse, you know, something like prey. It encapsulates beautifully who Michael is, a frighteningly violent human being masked by a clean, elegant, ambitious exterior. Yeah, the challenge of it was so wonderful to play, and Claudia was just an incredible scene partner too, to be so brave to allow us both to experience that horrible, horrible moment.

In contrast to your character, his friend from school winds up in prison. Was that important to you, having that balance in the story that men from these communities don’t all get to transition out?

It was an essential element inside Lyle’s narrative that these two men, these two Indigenous men, had to be so fully balanced. I was able to lean into Michael’s violence and fear, because I knew that Chaske, who was so brilliant at playing Teddo, could embrace the gentleness of indigenous masculinity, despite his exterior, despite the tattoos, despite his sort of thuggish appearance. To me, that’s the essential truth of the story.

This film, to me, is really an examination of how Indigenous men hold their pain. And the way that these two characters hold their pain are so utterly different. But I knew I could trust the storytelling, because it balances, so reasonably, the complexity of how our culture, and how the men in my culture deal with this kind of trauma.

Blood Quantum is one of my favourite movies of yours. It feels like there’s more opportunities for Indigenous creators in film and TV. Do you agree? Is there greater interest in that shared history and wider conversation?

I think so. It’s a well-known fact that Indigenous artists, Indigenous creatives have been fighting for access to the storytelling platforms since the beginning of cinema. Whether it’s through subversion, or participating in projects, and then subverting it to our own ends, or, in fact, taking the helm and reinventing the storytelling tropes and the apparatus of production to tell Indigenous stories, and to elevate those voices. So I’ve been part of both approaches.

I think what Blood Quantum, Wild Indian, and shows like Rutherford Falls have in common is that with Indigenous creators, and when I say creators, I mean decision-makers, someone who is present inside the production that has the authority to make decisions about the storytelling, about casting, about everything, the fact that another indigenous artist has that kind of authority is extremely freeing to me. Because I know that their approach is informed by history, by lived experience.

So I’m so grateful to have been part of those kinds of projects. But at the same time, there’s a growing sophistication in many of the other projects that came out of non-Indigenous hands. Like for example, True Detective, Nic Pizzolatto wrote a brilliant native character in season 3 that I had the pleasure of playing. What I love is that the new sophistication and dimensionality of the characters that are being written to me celebrate and reflect the work done indigenous creatives have done, indigenous writers have done already.

I’ve read that the movie was in 17 days. Can you tell me what that was like for you as a performer? Did it feel rushed, and did you get everything you wanted out of it?

Yeah, you know, Lyle is such a beautiful guy. We shot the entire film in 17 days. There was never a moment where I felt like he wasn’t in complete control, and that it wasn’t like a stroll in the park. He and Eli Bourne, our director of photography, were so efficient, they knew exactly what they wanted to photograph, and they knew how they wanted to do it. And Lyle, being the smart guy that he is, hired really seasoned actors to hold the narrative. 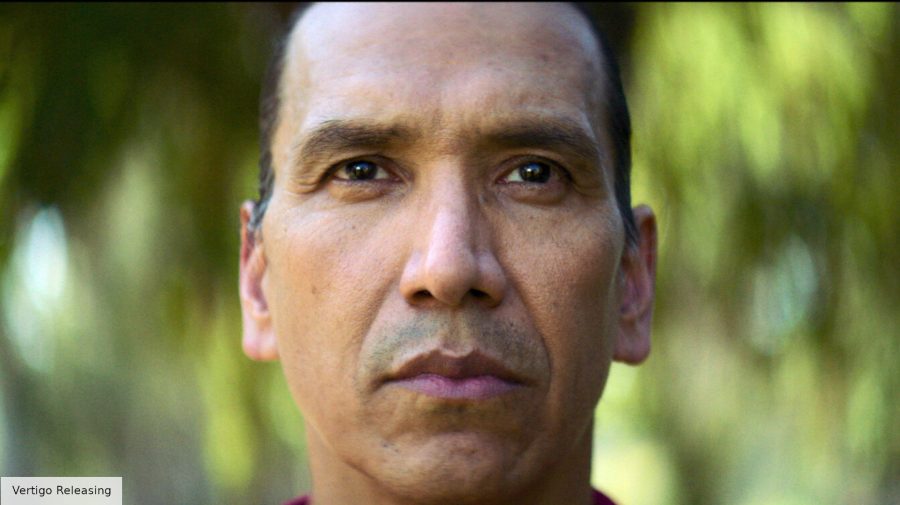 Chaski, of course, has been in many, many projects. He’s such a brilliant actor, and I’m a seasoned veteran. So I think Lyle relied on us to be able to bring our A-games to the set every day. When I said we filmed it in 17 days, I filmed that in ten. My whole character only worked ten days. And Chaska was a huge portion of the other part and the young boys. So I mean, we were working under the gun, but it never felt like it, because of their efficiency. I never felt like I needed another take. And I knew I was ready. I’ve been preparing for this role my whole life. So I wanted to bring that kind of energy to it.

Awesome – thank you for your time, and good luck with the movie, and congratulations on your nomination again. Hopefully, we’ll chat to you on the next one!

Oh my gosh, I look forward to it, thank you for this wonderful conversation.

Wild Indian is in theatres October 29.