Billy Crystal has an impressive Hollywood career, starring in popular flicks such as When Harry Met Sally and City Slickers. However, despite his silver screen fame, there is one role he still regrets turning down. In an interview with Yahoo Entertainment, the actor shared how he regrets saying no to the part of Buzz Lightyear in Toy Story.

Toy Story was a phenomenal benchmark in animation, being the first full-length feature to use CGI. The film currently holds 100% on Rotten Tomatoes and is still one of the best Pixar movies of all time. Crystal was initially offered the part of Buzz Lightyear, one of the leading plastic characters in the ‘90s movie. However, the actor turned down the part that would eventually go to Tim Allen. After seeing test footage that director John Lasseter had done when deciding the casting for the acclaimed family movie, Crystal realised his mistake. “I’m the schmuck who turned down Toy Story,” the actor states.

Luckily Lasseter would give Crystal another Pixar chance six years later, casting him as Mike Wazowski in Monster’s Inc. The actor recalled getting the part of the one-eyed character after his Buzz Lightyear fiasco. “I’m in my office… and John Lasseter’s on the phone,” Crystal shared. “I said, ‘All right listen: Whatever it is, yes!'”

While not as monumental as Toy Story, Monsters Inc is still one of the all-time animated greats and a beloved kids movie. Ultimately, it seems like all the casting decisions worked out for the best. We couldn’t imagine anyone else playing Mike or Tim Allen not voicing Buzz Lightyear in the original Toy Story franchise today.

Chris Evans is set to take over the role of Buzz Lightyear from Allen in the new Toy Story spin-off movie, Lightyear. The upcoming film will show the origin story of the toy space ranger and his journey to becoming an interstellar space hero. Lightyear is currently scheduled to release on June 17, 2022. 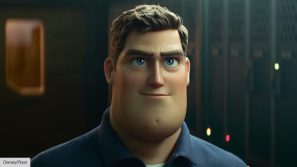