Jerry Bruckheimer and Joseph Kosinski flew to Paris, where Tom Cruise was shooting the thrilling car chase sequences for Mission Impossible: Fallout, to pitch him on Top Gun 2. The sequel was something that Cruise had ruled out over thirty years ago, so they needed to be persuasive.

Kosinski told The Digital Fix; “Well, with Tom, it started when Jerry Bruckheimer sent me an early version of the script. I read the script and had some ideas that I thought, you know, would get Tom interested. Having made a movie with him before (2013’s Oblivion), I knew the focus for him would always be on story and emotion. That’s the reason to go back. And so Jerry and I flew to Paris, where Tom was shooting Mission Impossible: Fallout.”

“In between set-ups, we got like 30 minutes of his time, so I pitched him, the idea of Goose’s son, and that reconciliation between the two of them being the kind of emotional spine of the film. I pitched him the idea of where we would find Maverick 36 years later.”

Kosinski continued; “[I also pitched] the idea of shooting it practically, which obviously, I knew was something that would be a requirement for him. And then, you know, I had a title in mind, which was Top Gun: Maverick, which tells the audience that this is a character driven story. And I think that after that Tom finally had something that he could wrap his head around and be emotionally engaged with. So that’s where we started on this journey.”

Top Gun 2 has won praise for that emotional engagement, as well as (of course) being a rip-roaring action flick with stunning aerial sequences. It is currently tied with Fallout for being Cruise’s best Rotten Tomatoes score. Therefore, I’m sure Cruise has no regrets about that meeting with Bruckheimer and Kosinski under the Arc de Triumph.

If you feel the need, the need for speed – check out our guide to the best action movies. 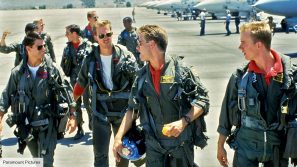 Top Gun cast: where are they now
Get involved Continue the conversation over on The Digital Fix Forum