Amazon’s The Lord of the Rings series could have one major overlap with Peter Jackson’s fantasy movie trilogy. Howard Shore, composer on Jackson’s films, is reportedly in talks to score the TV series.

This comes from Deadline, who simply state that discussions are happening between the musician and the streaming service. Though he’s composed and contributed to many of the best movies of all time, Shore’s work on the Lord of the Rings trilogy is perhaps his most iconic. His sweeping classical arrangements elevated the atmosphere and action in Jackson’s depiction of Middle-earth, with several themes that capture the energy and feeling of JRR Tolkien’s source material.

We only just got a first look image of Amazon’s project back in early August, showing what appears to be Valinor. Amazon has been skittish on specifics, with the only information we have being that it takes place during the Second Age of Middle-earth, so way before the events of the films, and the first season is eight episodes long. After that, who knows? Presumably it’ll have elves and dwarves and whatnot, but nothing’s confirmed.

Getting Shore involved would fit the blockbuster production strategy. Amazon has reportedly put down $465 million on the first season, making it one of the most expensive TV shows ever produced. On top of everything else, Shore is a quick way to reassure longtime fans this new interpretation of Middle-earth will still seem familiar.

Of the eight episodes, Wayne Che Tip is directing four, while Charlotte Brändström and Jurassic World: Fallen Kingdom director J.A. Bayona are heading two a piece. The Amazon Lord of the Rings series is due to premiere September 2, 2022 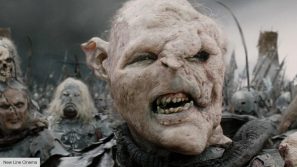 Lord of the Rings orc was based on Harvey Weinstein, Elijah Wood claims
Get involved Continue the conversation over on The Digital Fix Forum