If you had to come up with a modern-day equivalent of Jimmy Stewart, chances are, you’d land on Ted Lasso himself – Jason Sudeikis. And he’s now been cast as Stewart’s most iconic role – George Bailey. Don’t fret, we’re not getting a reboot of It’s A Wonderful Life (perish the thought) – instead, Sudeikis will be taking on the role at a charity live read-through of the script.

Celebrity live-reads are not a new concept, but have taken on a different form during the pandemic, with them now being mostly virtual. This is the second virtual live-read of It’s a Wonderful Life to benefit The Ed Asner Family Center – last year SNL’s Pete Davidson took on the role of George Bailey. Ed Asner was directly involved in last year’s event, but this year’s will be a tribute to him, because he passed away in August 2021.

Ghostbusters: Afterlife director Jason Reitman popularised star-studded live reads when he produced a semi-regular series of them at LACMA between 2011-2016. Some memorable ones included all-female readings of Glengarry Glen Ross and Stand By Me, Adam Sandler playing the Kevin Spacey role in American Beauty or Kate Hudson taking her mother Goldie Hawn’s role in Shampoo. Sometimes the original actors would show up, such as Susan Sarandon in Bull Durham or Cary Elwes in The Princess Bride.

Ed Asner’s son Matt made a statement about this year’s Live Read of It’s a Wonderful Life in Variety; “My father’s passing has left an indescribable hole in my heart. For our annual fundraising gala this year, I want to honor my father’s legacy as both a legendary actor and a staunch advocate for people of all abilities.”

He continued; “I would like to thank Turner Classic Movies for partnering to support our effort to raise much needed funds for special needs families and I am eternally grateful for the support shown by our amazing cast. I would also like to thank MeTV for their generous sponsorship of this event.”

It is certainly easy to imagine Jason Sudeikis stepping into George Bailey’s shoes and it will be fun to see how the rest of the cast fills the supporting roles. The event will take place on 5 December. 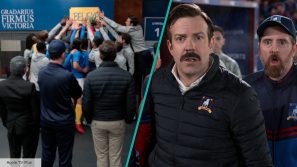 Ted Lasso season 3 release date, trailer, plot, and more
Get involved Continue the conversation over on The Digital Fix Forum