Nintendo has its new Super Mario Bros movie on the way, and that’s not all. During a corporate briefing, the games company revealed it plans to invest nearly half a billion dollars into filmmaking around its properties.

This was noted by games industry analyst Daniel Ahmad, who shared a selection of the slides and insights from the presentation on Twitter. On one looking at further investment plans, “non-game entertainment” is allocated “up to 50 billion yen”, or roughly $450 million. The slide describes this as “business opportunities that have affinity with the game business”, listing “visual content” as an example.

In other words, animated movies and animated series based on Nintendo’s wealth of characters and properties. Right now, the as-yet-untitled Super Mario movie is the only project we know to be in production, a collaboration with Illumination that features the voices of Chris Pratt, Anya Taylor-Joy, and Seth Rogen. But it stands to reason this is just the start of a broader franchising deal that will kick into high gear once this adventure movie is a success.

Rumours have already swirled of other productions in the offing. A solo Donkey Kong film, led by Seth Rogen, is said to be in development. While unsubstantiated, it tracks that part of Rogen’s deal would include potential spin-offs. Likewise, we wouldn’t be surprised if Peach, Luigi, and more got their own headline features, since the cast is so A-list.

This strategy will be underpinned by increased investment in key areas

– Up to $900m in game software investment.
– Up to $450m in IP expansion such as movies
– Up to $2.7 billion in infrastructure to reach consumers, such as My Nintendo, Nintendo Online / eShop, retail stores pic.twitter.com/wWAo8Qs1an

The new Super Mario movie is directed by Aaron Horvath and Michael Jelenic, from a script by Matthew Fogel. It’s currently set to release into theatres December 21, 2022 in the US, with winter dates for the rest of the world.

We haven’t seen so much as an official image as yet, never mind a formal title, but when we know more, so will you. We have the best kids movies for more all-ages fun. 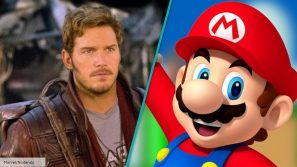