During the last three seasons of Stranger Things, we’ve seen some pretty extraordinary things including, telekinesis, monsters, and parallel dimensions. According to Shawn Levy, executive product of the TV series executive producer, though we haven’t seen anything yet, the upcoming fourth season is more epic than anything that’s come before.

“It’s epic storytelling,” Levy told /Film. “It’s still rooted in character, but the scope of the storytelling is more epic and cinematic than we’ve ever attempted before.” Levy has spoken previously about the increased scale of the upcoming fourth season, explaining to Collider that this is their most ambitious series yet, and that’s slowing down production.

“So you kind of know we’ve got some action in Hawkins, we’ve got some action apparently in Russia, and we have an entire storyline set elsewhere that will soon come to light,” Levy said. “So this is the first season where we have this sprawling geography, multiple location shoots, and we’re doing it all against a backdrop of a world that has made filming slower longer in delay. So that’s why it’s taking so long.”

He went on to say that Stranger Things has a relatively small production team who are all very hands-on with all aspects of the project, from sitting in the edit suite to helping design promotional Nike shoes. All of this helps to maintain the series high quality but has a negative impact on production schedules.

Stranger Things is a sci-fi TV series created by the Duffer Brothers that stream exclusively on Netflix. Set in the nostalgic heyday of the ‘80s in a fictional town called Hawkins, the show follows the town’s residents as they battle the weird and horrifying denizens of the Upside Down, a dimension that runs parallel to our own.

The show has attracted record viewership for the streaming service, a legion of dedicated fans, and numerous award nominations. A fourth season is in production now, although Netflix hasn’t confirmed when the new series will premiere. 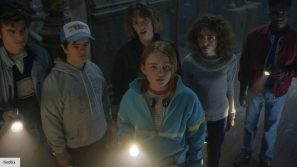