A new teaser for Star Trek: Picard season two has dropped, and we finally know when the sci-fi series will debut. Picard and the crew of the La Sirena will be boldly going where no one has gone before in February 2022. This new trailer also reveals what Picard’s second outing will actually be about.

We knew from the first teaser that season two would involve Picard’s (Patrick Stewart) old nemesis Q (John DeLancie) and time being broken, but we didn’t realise the extent to which time travel would be involved in the plot. The trailer shows that Q has used his phenomenal cosmic powers to alter the course of history, transforming the federation from a utopian society to a despotic fascist state.

The only people who remember the world that was are Picard and his crew, and they set out to set right what once went wrong and restore the Federation to its former glory. To do so, they’ll travel back in time to 21st century LA, the point where Q changed the timeline. Will Picard and the gang be able to fix the timeline? Well, considering Q tends to only be testing humanity, not punishing them, it’s likely he’s left some way for our heroes to succeed.

Q isn’t the only old villain returning. In order to travel back in time, it looks like Picard will be seeking help from the Borg Queen. First introduced in the science fiction movie Star Trek: First Contact, The Borg Queen is the leader of the Borg – a race of cybernetic zombies who assimilate the technology of any race they deem valuable. The Borg are more than capable of travelling back in time, so it makes sense that Picard would turn to them for help in violating the temporal prime directive.

With all his enemies returning, it’s unsurprising that Stewart asked for at least one of Picard’s old friends to be brought back as well. We got Riker (Jonathan Frakes) and Troi (Marina Sirtis) in the first season, but it’ll be the Enterprise’s enigmatic barkeeper Guinan (Whoopi Goldberg) who returns. Stewart asked Goldberg to reprise her role on her show The View.

“I’m here with a formal invitation, it’s for you, Whoopi,” he told her. “Alex Kurtzman, who is the senior executive producer of Star Trek: Picard, and all of his colleagues, of which I am one, want to invite you into the second season.” Goldberg later confirmed to SFX that she’d taken up the invitation and would be in the second season though she didn’t elaborate on how substantial her role would be. 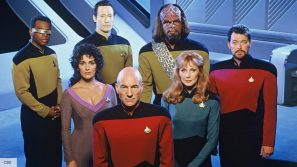