The late Robin Williams was one of the most distinctive actors in Hollywood. His warmth and incredible comedic talent heightened everything around him, yielding some of the best movies of all time. If a biopic is ever made about him, Jamie Costa has made a strong case for the role.

Test footage of Costa portraying the Hook and Jumanji star is doing the rounds, and it’s impressive stuff. It’s a backstage scene from TV series Mork and Mindy: Williams is getting ready to shoot when costar Pam Dawber, played by Sarah Musphree, sits him down to tell him that John Belushi has just passed away. Belushi and Williams were close, and the comedy movie legend is crushed by the news, running the gamut of emotions.

The bit is effective in showcasing Costa’s handle on why we all loved Williams. He was intense, enigmatic, but also completely loveable and always entertaining. The performance is for a hypothetical biopic called Robin, an already great idea made even more enticing by seeing someone like Costa who can harness Williams’s energy.

The video has caught the attention of the internet at large, spurring a lot of shares and commentary on social media. Over three million views have been racked up at time of writing – showing there’s some interest.

Someone who’s been made hyper aware of all the hubbub is Zelda Williams, daughter of the Good Morning Vietnam and Good Will Hunting star. She has tweeted praise for Costa, but also requests that people stop sending her the video. If you’re excited, maybe resist thinking the man’s family isn’t already aware, eh?

Guys, I’m only saying this because I don’t think it’ll stop until I acknowledge it… please, stop sending me the ‘test footage’. I’ve seen it. Jamie is SUPER talented, this isn’t against him, but y’all spamming me an impression of my late Dad on one of his saddest days is weird.

Recently, when speaking about Williams, Hook costar Donnie Brasco said it was like being around Genie from Disney movie Aladdin. “He played the Genie in Aladdin, and he is the Genie when you’re around Robin Williams,” Brasco says. Hook celebrates its 30th anniversary this year – you can find it on Amazon Prime Video if you’d like to revisit it. You can sign up through our affiliate link here. 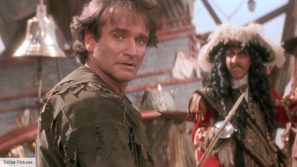