Robin Williams was one of the most charming and enthusiastic actors to hit the big screen, and apparently, he was just as colourful off-camera as well. During an interview with Screen Rant, Dante Basco – who starred alongside Williams in the 1991 adventure movie Hook – recalled what it was like working with the actor. According to Basco, Williams was just like the energetic Genie from the famous Disney movie Aladdin in real life.

Directed by Steven Spielberg, Hook is a live-action sequel to Disney’s animated movie Peter Pan, set some years after the original. The story follows a successful corporate lawyer Peter Banning (Robin Williams), who, after having his children kidnapped by Captain James Hook (Dustin Hoffman), learns that he is actually Peter Pan and must travel to Neverland once again. Dante Basco played the role of the lost boy Rufio in the family movie and worked closely with Williams during the production.

Now, 20 years since the fantasy movie released, Basco was asked what it was like working with the beloved actor back in the ‘90s. The actor responded, saying that Williams is just like another one of his famous and charismatic roles off-camera – none other than the magical Genie from Aladdin.

“Robin comes up all the time and rightfully so because he’s just a magical person. The short answer’s always like, ‘Hey, man, Robin’s the Genie.’ He played the Genie in Aladdin, and he is the Genie when you’re around Robin Williams,” Basco explains. “He’s so smart and so fast and so funny and so kind, and magic can happen and often does. So, I mean, in a nutshell, that’s Robin Williams.”

Williams voiced the character of the musical blue Genie back in 1992, and the part has gone down as one of the most memorable performances in his impressive career. His other iconic roles include Jumanji, Mrs Doubtfire and Flubber. Besides kids movies, Williams is also known for his dramatic work, such as Good Will Hunting, where he went on to help Matt Damon get cast in the war movie Saving Private Ryan.

Since his tragic passing in 2014, Robin Williams still manages to touch movie lovers and his co-stars’ lives, and lives on through his beloved body of work. If you are anxious to watch Williams in Neverland, Hook is available on the streaming service Netflix for UK viewers. 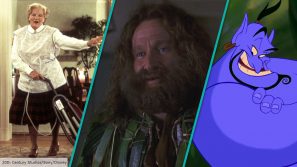 {"schema":{"page":{"content":{"headline":"Hook star Dante Basco says Robin Williams was like real life Genie from Aladdin","type":"news","category":"robin-williams"},"user":{"loginstatus":false},"game":{"publisher":"","genre":"Action & adventure","title":"Robin Williams","genres":["Action & adventure","Animation","Comedy","Drama","Family","Fantasy","TV","Movies"]}}}}
We sometimes include relevant affiliate links in articles from which we earn a small commission. For more information, click here.
Trending in Movies