Netflix is gearing up to head into Racoon City this year with its new Resident Evil TV series. Based on the iconic videogame franchise of the same name by Capcom, any Resident Evil project is typically met with open arms from horror fans. However, some exciting news will undoubtedly please all you videogame enthusiasts – the horror games and the upcoming series officially exist in the same universe.

In an interview with Comicbook.com, showrunner Andrew Dabb revealed that the zombie games are officially canon, while the other Resident Evil films that we have seen in the past are being left behind in this instalment. Dabb went on to explain that all the different locations, such as the eponymous village from the recent Resident Evil: Village, will be visited at some point, and will work as a backstory for the series, which is set in the year 2036.

“The games are our backstory. Everything that happened in the games exists in this world. So like the village is there. We might not get there till season 5, but it is in our world; we can play with those, you know, as we’re now moving ahead,” Dabb said.

Dabb clarified that although the games are canon, viewers shouldn’t expect an overload of references and fan service in one go. “We’re doling it out in pieces. We’re not being like, episode three, like meet the Redfields, episode four, here’s Leon,” he continued.

“I’m sure there’s a certain part of the fan base that I’m sure would be like, please do that version. But for us, it was more important, like, let’s take you on this journey. And then, as the journey goes on and on, we will touch on different quarters and aspects of the mythology.”

As we said before, the upcoming series won’t be connected to any of the past Resident Evil zombie movies, including the 2021 film Welcome to Racoon City. It is exciting that Netflix is looking for a fresh start and will be honouring the IP’s source material going forward.

The Resident Evil series will consist of eight hour-long episodes, which will all be dropping on the streaming service come July 14. 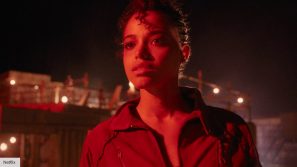 {"schema":{"page":{"content":{"headline":"Resident Evil games are canon to Netflix series","type":"news","category":"resident-evil"},"user":{"loginstatus":false},"game":{"publisher":"","genre":"Action & adventure","title":"Resident Evil","genres":["Action & adventure","Horror","Science fiction","TV","Movies"]}}}}
We sometimes include relevant affiliate links in articles from which we earn a small commission. For more information, click here.
Trending in TV