What will Quentin Tarantino’s next movie be? He’s now sure at the moment, still coming off the success of 2019 drama movie Once Upon A Time In Hollywood, but Kill Bill 3 is a possibility.

“Why not?” he responded when asked about giving Uma Thurman’s Bride a trilogy during the Rome Film Festival, as reported by Variety. The Pulp Fiction and Reservoir Dogs filmmaker was there to receive a lifetime achievement award, taking part in a Q’n’A session while in attendance. Topics included his history with film and what inspires him, but the hot button subject was what he’s got lined up. Quite a bit, it turns out, with a book, and a TV series in the offing

Another film idea has his eye too – a “spaghetti western style” comedy movie. “The Mexican Bandido is an Italian; the hero is an American; the bad sheriff is a German; the Mexican saloon girl is Israeli. And everybody is speaking a different language,” he explained. “And you just know: OK, when he’s finished talking then I can talk.”

Tarantino was presented the award by horror movies legend Dario Argento. Whatever he decides, this will be his tenth feature, his last, if he sticks to his decree that he’ll retire. Ten movies in just over three decades is good innings, especially when you consider all of them are original scripts.

Tarantino made and release both parts of Kill Bill in the early 2000s, a pair of revenge thriller movies about Thurman’s Bride getting back at the man who betrayed. They’re bloody, action-packed, and beloved, because of how well they merge the spirit of martial arts films with contemporary violent filmmaking.

You can find Kill Bill Vol 1 and 2 on streaming service Amazon Prime – sign up through our affiliate link here. 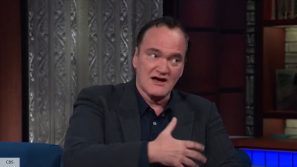