We’re still waiting on Peaky Blinders season 6, but in the meantime, the movie is coming together. Steven Knight, creator of the TV series, believes it’ll start shooting in 2023.

He revealed this during a panel at the BFI London Film Festival, as transcribed by Variety, where he also pointed out the thriller movie will be an ending to the show as it currently stands. “And then I am going to write the feature which will be set in and shot in Birmingham,” Knight said. “And that will probably be the end of the road for Peaky Blinders as we know it.”

The next season of the popular Netflix TV series, about the Shelby gang in Birmingham in the 1920s, is expected to premiere sometime early 2022. That leaves the drama movie to close things up in 2023, then whatever’s next. “Shows related” to the original may appear, says Knight, but he’ll be stepping away. He’d prefer to “pass on the baton” to younger talent and give them the opportunity, he says.

Since starting in 2014, Peaky Blinders has one of the more popular series of the last decade. Led by Cillian Murphy as Tommy Shelby, multiple members of the family, and their opposition and rivals are depicted over the course of several years, leading right up to the 1930s.

Each season has consisted of six episodes, and it’s now been over two years since season 5 hit our screens. Filming on season 6 finished in May, leaving all the editing and post-production to do. In January, it was revealed that the sixth season would be the end, however the film looks set to provide an even more explosive conclusion to the Shelby saga.

We don’t know when season 6 will start, but you can watch the previous five seasons on Netflix now. 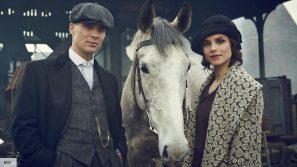 Peaky Blinders season 6 release date, trailer, and more
Get involved Continue the conversation over on The Digital Fix Forum