A new teaser trailer and poster have been released for Roland Emmerich’s latest action movie Moonfall, starring Patrick Wilson, Halle Berry, and Donald Sutherland – which has a release date of 4 February 2022. After covering aliens in Independence Day, climate change in The Day After Tomorrow, and Mayan prophecies (?) in 2012 – the German director now brings us a moon-based threat to humanity.

Nothing can beat the austere tones of veteran actor Donald Sutherland delivering exposition over scenes of science fiction movie shenanigans – and that’s exactly what this trailer delivers.”In school, you were taught that Apollo 11 lost contact with the world for two minutes. Not true. They found something on that day that they kept hidden for 50 years.”

A juicy set-up for a disaster movie, if ever there was one. And whatever is going on in the lunar world is having an adverse effect on Earth – with tidal waves being the first stage of a potential extinction-level event. Can humanity survive? We’ll have to watch to find out.

The plot synopsis is as follows: “In Moonfall, a mysterious force knocks the Moon from its orbit around Earth and sends it hurtling on a collision course with life as we know it. With mere weeks before impact and the world on the brink of annihilation, NASA executive and former astronaut Jo Fowler (Academy Award winner Halle Berry) is convinced she has the key to saving us all – but only one astronaut from her past, Brian Harper (Patrick Wilson) and a conspiracy theorist K.C. Houseman (John Bradley) believes her.”

“These unlikely heroes will mount an impossible last-ditch mission into space,” it continues. “Leaving behind everyone they love, only to find out that our Moon is not what we think it is.”

So it appears that there will be battles on two fronts – one to save the Earth and one to investigate whatever is happening on the moon…or should that be inside the moon? Either way, the crowd is surely going to go wild at the latest disaster flick that (almost) destroys Earth while simultaneously exploring space. 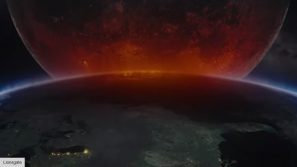