Watching the unnamed protagonist wander the rotting landscape of Mad God, it’s plain to see why the animated movie has taken three decades to finish. Every corner and every crevice seems to hold another disgusting treat, usually some monster or other that then gets into a skirmish with another hellspawn.

Phil Tippett, an effects master who’s worked on the Star Wars original trilogy, Jurassic Park, and Starship Troopers to name but three, has laboured with the project for 30 years. Now, his stop-motion brainchild is finally being shared with the world, in all its horrifying, grotesque, and mesmerising glory.

The horror movie positions itself akin to Tippett’s dedication, with a lone wanderer descending multiple layers of a rotting civilisation. Clad in a hazmat suit and gas mask, only a crumpling map for guidance, they silently trudge forward, trying to avoid all manner of low-dwelling mutations. Their path is a dreary, lonesome one, brought stunningly to life in ways that are both beautiful and hideous. It’s kind of a masterpiece.

A long elevator ride begins the film, lowering us into what now seems like a vast tomb. Dust and ash lay on the corpses and remnants of whatever this society was. For a time, Mad God is quiet, unassuming almost, but that doesn’t last long. The ever-grinding gears of a huge engine unfold before us, a machine of perplexing vastness fuelled and manned by faceless humanoids that scuffle the endless conveyor belts.

Mass quantities of sludge are produced, siphoned down to enormous, all-consuming mouths. Giant bodies are strapped to electric chairs to create more slurry. Automated trains carrying supplies bulldoze through anything and everything to keep the supply chain ticking over. Eyes attached to these gullets of consumption glare in all directions, bulbous and bloodshot. If they’re alive, they seem as trapped as the fleshy workforce.

Logistical sense is not something Mad God concerns itself with. The macabre, ethereal environments flow from one to the other as if by stream of consciousness. Paths cut through dilapidated valleys and crumbling monuments, and segways lead into disturbing dream sequences and other worldly diatribes. Some live actors appear, Repo Man’s Alex Cox among them, though nothing is spoken. A female nurse hands a crying baby off to some gigantic, shadowy spirit, the kind of thing you’d expect the characters in Dark Crystal to be terrified of even thinking about. 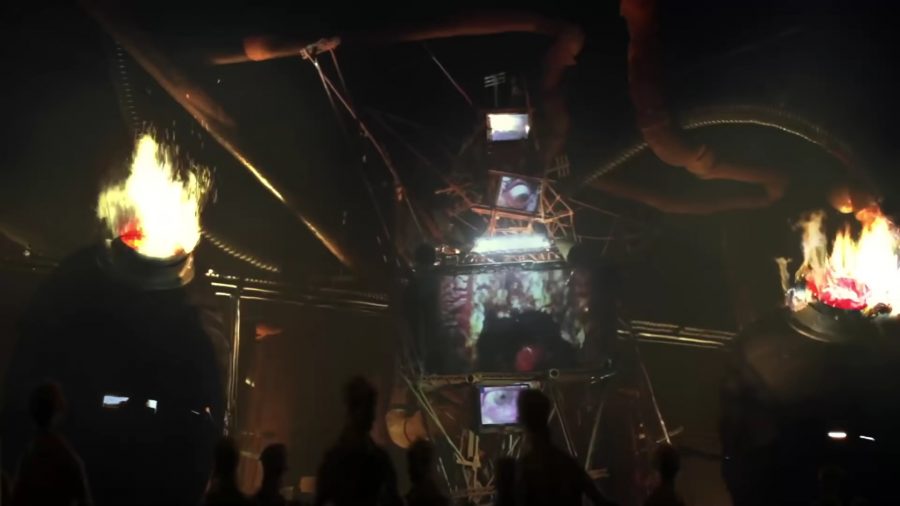 It’s a tone piece, led by what’s feasible through stop-motion filmmaking. The discipline has long lent itself to the horrific and discomforting, from Ray Harryhausen’s genre-defining monster movies like It Came From Beneath the Sea and Jason and the Argonauts, through to the more contemporary James and the Giant Peach and Coraline. Mad God pushes those limits, and pushes us with it.

You can sense the creative freedom. It radiates from all the slime and puke, slithery critters and deformed animals. The piles of excrement and whatever else. Tippett and co-cinematographer Chris Morley capture every set and model as if for some imaginary documentary, getting multiple angles, hanging around to catch any idiosyncrasies. This is a cruel, barbaric world, and we’re given every possible second of it.

Dan Wool’s soundtrack is one of the few comforts, a floatation device through the sea of nihilism. Among the swift changes, ranging from being trapped in a live autopsy to sinking into a microscopic forest, the music offers a guiding hand, smoothly sifting through the deluge. If the imagery ever starts to overwhelm, focusing on the brooding synths offers some respite.

Tippett’s feature comes in an era of auteurist animation. Mad God is screening right after Evangelion: 3.0+1.0 Thrice Upon A Time came out on Amazon Prime, Evangelion creator Hideaki Anno’s swansong to the anime series. Genndy Tartakovsky, of Samurai Jack and Star Wars: Clone Wars fame, kicked off his new original series Primal in 2019. They share a purity of vision, the feeling of uncompromised work from concept to execution.

Mad God is repulsive and, at times, incomprehensible. But there’s value in something that embraces those ideals so unwaveringly. There’s an honesty to standing in a landscape besotted by its own degradation without respite. Bodies ground up by constant moving gears to make literal slop for pigs to soak up. Sometimes life is brutal and it feels hopeless, and maybe we’d be better off if we expressed it as plainly more often.

Some verses from Leviticus provide the only words, ending with 26:33: “But I will scatter you among the nations and will draw out a sword after you as your land becomes desolate and your cities are laid waste”. It took a lot of maneuvering and belief to get the film here, the kind of biblical undertaking that belies the fury Leviticus describes. For those who connect with it, Mad God may seem like an answer to their prayers. Everyone else can enjoy the desolation.

This screening was part of the Edinburgh International Film Festival – you can find out more about the event here.