Jurassic World: Dominion will no doubt be as action-packed as the previous adventure movies in the franchise, and fans can look forward to seeing more giant toothy monsters when the film releases next year. However, one dinosaur didn’t make the cut, and won’t be included in the prehistoric line-up, despite six years of Spider-Man: Into the Spider-Verse co-writer Phil Lord’s best efforts

Phil Lord has apparently been texting Jurassic World writer Colin Trevorrow since the first movie released back in 2015. The writer has been trying to get Trevorrow on board with introducing a new hybrid dinosaur – a Brontosaurus Rex – into the Jurassic franchise. That’s right, Lord is petitioning for a monster that is a crossbreed between a Brontosaurus and a Tyrannosaurus Rex, and what is more, it looks like he is not taking no for an answer.

After the Brontosaurus Rex was snubbed yet again and didn’t appear in the 2018 movie, Jurassic World: Fallen Kingdom, Lord hasn’t given up, and is still trying, yet again, to get Trevorrow to include his creation in the latest entry to the hit science fiction movies. Trevorrow posted a screenshot of Lord’s messages on Twitter – showing the director’s persistent pleading of the dinosaur’s case.

“This is your last chance to put the brontosaurus Rex in,” the screenshot reads. “Reminder this is a brontosaurus with very tiny legs in the front and huge hunches in the back but it walks on all fours. The long neck just allows its head to be level with its hips. It is VERY cool.” A fan replied to the tweet with a model of the proposed hybrid, and it is certainly an unsettling dinosaur, to say the least.

Yes, the dinosaur is straight up ridiculous, and judging from Trevorrow’s jokingly tired post, it probably won’t be included in Dominion. However, when it comes to this franchise and fun with genetics, you can never say never.

For years we have seen dinosaurs being made in Jurassic Park’s labs, and have even witnessed a Velociraptor go through a transfusion with Tyrannosaurus blood in Jurassic World: Fallen Kingdom. So, a brontosaurus Rex, or any other silly hybrids don’t seem that outlandish. Trevorrow has also hinted that the franchise won’t end after Dominion, so who knows? Lord may get his wish one day.

Jurassic World: Dominion is set to release on June 10 2022, across the UK and US. 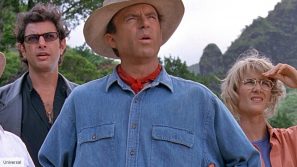 Jurassic Park cast: where are they now?
Get involved Continue the conversation over on The Digital Fix Forum