Filming on Indiana Jones 5 has been underway since June, and parts of Glasgow, Scotland are being used for the adventure movie. Two streets have been transformed into New York City for the production.

If you venture to Glasgow city centre at the moment, you’ll spot a great deal of American flags, and some odd looking traffic lights. On St Vincent street, down towards Cochrane street, two sets have been set up for filming. On one end, towards the top of St Vincent street, there’s quite a bit of decoration, some window displays done up to look like shops and delis from New York in the ’60s.

On the other end, down toward Cochrane street, a photography building features lots of posters protesting the Vietnam war, and advertising for various societies within Hunter College. That’s an actual college in New York, though so far, Indy has only taught at Marshall College in the city. Going by clues on the displays, this is all for a replication of the ticker tape parade held for the astronauts of Apollo 11 after they safely made it back to Earth. Buzz Aldrin, Neil Armstrong, and Michael Collins were given a hero’s welcome in New York on August 13, 1969, and it looks like Dr Henry Walton Jones Jr may have been in attendance.

This puts the upcoming fifth Indiana Jones movie 12 years after the events of Indiana Jones and the Crystal Skull, assuming it wholly takes place in ’69. The props and sets don’t provide much more specific clues than that.

Glasgow has featured in many Hollywood movies, including the 2013 zombie movie World War Z, and Fast and Furious 6. Aside from being gorgeous, it was built using the same grid layout as New York, making it easy to create the sense of an American city. Throw a few stars and stripes about the place, and in the right weather, you’d nearly believe you were on the east coast of the US, except there’s more Irn-Bru. No sightings of Ford, or any of the other stars, so far, but we’re keeping our eyes peeled.

Indiana Jones 5 is being directed by James Mangold, and has Harrison Ford returning to the iconic role. Apart from Glasgow, cameras have rolled in the Scottish village of Glencoe and the Leaderfoot Viaduct. Pinewood Studios, and parts of London and South Lankashire have also been used. 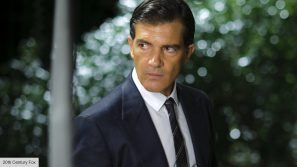