The first photos of Harrison Ford in full costume on the set of Indiana Jones 5 have hit the web, and fans couldn’t be more excited to see Indy back in action. Okay, action might be a bit dramatic, he’s literally stood about wearing a mask, but still, it’s cool to see Ford back in his iconic hat and leather jacket.

The photos, which show Ford and Lucasfilm producer Kathleen Kennedy, were taken by IJ Adventures Outpost as Indiana Jones 5 began shooting this week in the north of England. Specifically, filming took place in North Yorkshire and at Bamburgh Castle in Northumberland, which was turned into a Nazi base full of WW 2 era Nazi military vehicles like tanks, cars, and even a train.

Fans have been sharing their delight at seeing Ford back in the saddle on social media, with one writing: “This photo makes me very happy. It’s shooting! One more adventure!” While another joked he didn’t know he wanted another Indiana Jones film until he saw the photos.

It’s been 13 years since the last Indiana Jones adventure, Kingdom of the Crystal Skull, which received mixed reviews on release, but there’s plenty of reasons to be excited about the new movie.

There’s an incredible cast, including newcomers Phoebe Waller-Bridge and Mads Mikkelsen, who fans are confident will be playing the bad guy. Behind the camera, the fantastic James Mangold (Logan) is taking over directing duties from Steven Spielberg (who’s producing), and the whole thing’s being written by Jonathan Kasdan (Solo).

The real reason to be excited about the film, though is that it seems we’re finally going to see what Indiana got up to during WW2. Crystal Skull, which was set in the ’50s, referred to his efforts during the war, but we’ve never seen them on the big screen before and we’re always ready to see Indy punch some more Nazis.

While it’s unlikely the whole film will be set during WW2 (no one wants a digitally de-aged Harrison Ford on screen for 90 minutes plus), it’s exciting to think how this set fits into the film’s narrative. Perhaps it’s a prologue that sets up the conflict of the movie? Or maybe there’s a secret Nazi base in the film for some reason?

Look who walked right past us in Grosmont today… our son asked him if he was Indiana Jones and he tipped his hat and said no, he was just the stunt double 😂 pic.twitter.com/u7XH1RA1bT

If you love Indiana Jones you have to check out our list of the best adventure movies. 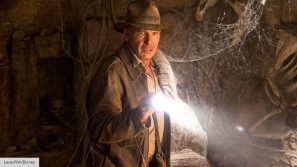