The next Indiana Jones film is set to begin production. It’s been reported Indiana Jones 5 is gearing up for cameras to roll as early as the week starting June 7 – next week, at time of writing – and some of the cast has been spotted near the lot.

Joining Ford on his fifth outing as the elusive Indy is Mads Mikkelsen, Boyd Holbrook, Phoebe-Waller Bridges, Shaunette Renée Wilson, and Thomas Kretschmann. The soundtrack is being composed by John Williams, so while we don’t know much of anything about the plot or context for the next Indiana Jones film, we do know it’ll sound the part.

The last time we saw Ford grab his whip and fedora was 2008’s Indiana Jones and the Crystal Skull, a film that wasn’t exactly loved, but drew nearly $800 million dollars globally. Plans for another have been coming together since 2016, having been delayed or way or another until now.

A new film isn’t the only thing Indy fans have to look forward to. Earlier this year, Bethesda and Lucasfilm Games announced a new Indiana Jones videogame, being developed by MachineGames, the studio behind the recent Wolfenstein games. Expect much Nazi punching and shooting.

We don’t know much of anything about that game, but the as-yet-untitled Indiana Jones 5 is due to open in theatres July 29, 2022. 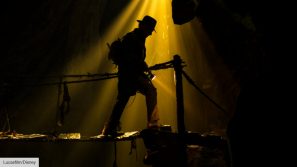